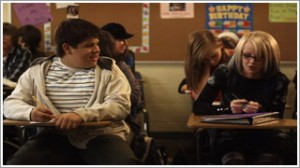 Obesity is a very serious issue especially amongst young children. If you match that with the subject of bullying and this film really aims to deliver a very important message. The movie definitely packed some really emotional content into its short 78 minute run time. Christopher Rivera delivers a fantastic performance and really grabs hold of the audiences attention from the start. It is inspiring and also very educational for kids and adults.

The film itself is inspired by a true story, which makes it feel even more real and important. It follows Jimmy Winterpock, who is an overweight student starting his first year in high school and dealing with being bullied by his classmates. The film follows Jimmy’s efforts to overcome his bullies and win the girl of his dreams.

The special features are decent and include a preview of the eBook and information on Bully Prevention. Also included is an audio commentary track from the director and some interesting interviews from the cast, all worth checking out for sure. The only issue I had with the film itself was the teenage murder subplot. I thought it was a little out of place and didn’t really fit into the films message. In the end I feel that the film succeeds in delivering its important message and hopefully people will see this film and take its issues seriously.