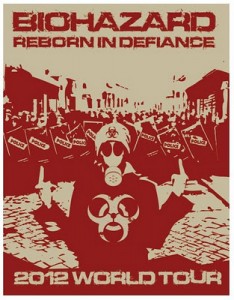 Biohazard brought their brand of NY hardcore to Station 58 in Syracuse, NY on Wed. Feb. 8th and even though the turn out for the show was somewhat small and, Biohazard guitarist Bobby Hambel was suffering from pneumonia the Brooklyn born band still put on a great show for all those in attendance.

Jonestown hailing from Watertown, NY kicked off the show as fans slowly made thei 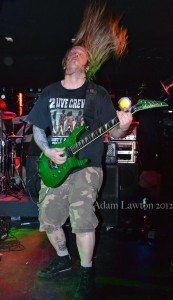 r way through the intimate venues door. A small number of people posed no problem for the band as they put on performance as though the venue was filled to capacity. Fan favorite Caustic Method took the stage in the form of a 3 piece due in part to still training a new guitar player. You wouldn’t have known the band was playing a man down as they blasted through a 30 minute set which had people banging their heads and pumping their fists. Syracuse’s own Ghost Ship followed and performed a solid straight edge filled set reminiscent of early spirit 90’s era Earth Crisis shows.

Veteran hardcore group Sworn Enemy was on next and after a brief stage change proceeded to kick the night/crowd into a giant circle pit of fury. Performing a variety of songs from the bands 17 year career did a great job of priming the crowd for what was to come. As soon as their last song was done the crowd pushed forward in preparation for the nights headlining act to take the stage. 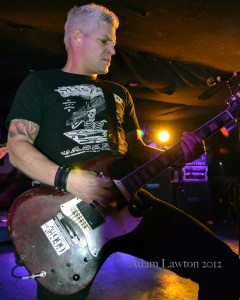 Biohazard helmed by energetic vocalist/guitarist Billy Graziadei hit the stage at 10pm and for one sweat filled hour packed enough punch in their set to knock out the likes of UFC champion Anderson Silva. Despite guitarist Bobby Hambel suffering from a severe case of pneumonia he played as nothing was wrong and only paused for a brief second to throw up behind his amp once or twice. The set list featured a variety of classic songs and a few songs of the band’s latest album titled “Reborn in Defiance”. Even though the bands line up was not fully the original due to former bassist/vocalist Evan Seinfeld leaving the band last year Scott Roberts did a great job filling the void. On February 8th, Biohazard proved to Syracuse, NY that they are still the raining kings on NYC hardcore.