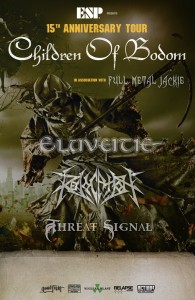 January 30th ad the Water Street Music Hall in Rochester, NY played host to the third show of a 36 date tour which is celebrating the 15th anniversary of the Finnish heavy metal group Children of Bodom. Along with Children of Bodom the nights line up featured special guests Eluveite, Revocation and Threat Signal.

Ontario, Canada’s Threat Signal kicked off the show playing a blend of harmony infused metal that did a great job priming the audience. Though their set was brief the band seemed to put everything they had into their performance. Revocation would take the stage next and treated the crowd to what could be described as Mid-Evil Metal. Front man Dave Davidson did a great job of setting the story for each epic song prior to its performance. This only seemed to 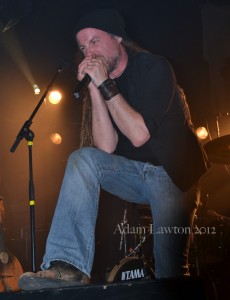 draw the crowd more into the band’s blend of progressive, mystically tinged music.

The 8 piece Celtic-metal group known as Eluveite would be up next and despite every inch of the stage being filled with band members and instruments Eluveite stole the show. Lead vocalist Chrigel Glanzmann had the crowd in the palm of his hand during the bands 40 min. set. Chrigel and the rest of the band filled the venue with a variety of unique sound normally not heard in the metal genre. The band performed a number of tracks off their 2010 release “Everything Remains (As It Never Was)” album as well as a few new songs off the upcoming “Helvetios” album. After an impressive 40 min. performance the band left the stage to repeated chants of “one more song”. 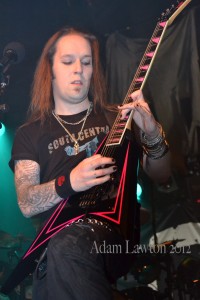 Children of Bodom closed out the night treating the fans with songs that spanned their 15 year career. Front man Alexi Laiho put on a blinding display of guitar playing only further confirming why he is often considered one of the top metal guitarists of the day. Through most of the set I found Alexi’s vocals hard to hear over the deafening roar of guitar and drums. This could have been attributed to the tour being only on its third show and still having some bugs needing to be worked out or, the band is really just the loud. Over all the bands performance was ok. Personally I would have liked to have heard one or two covers tracks off the bands “Blooddrunk” album.

If you have never seen Children of Bodom before I highly recommend making out to one of the shows on this tour. I recommend getting their early as the entire tour package is really solid. Also you definitely won’t want to miss Eluveite.