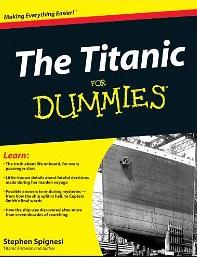 With the Titanic celebrating it’s 100th anniversary this year, expect a lot of coverage on this subject all year. This book is a must for an history buff and it provides enough information for even those to claim to know everything about the Titanic. “The Titanic For Dummies” covers every single aspect of the shipping from its building of the ship to that fateful night to its affect on pop culture i.e. James Cameron’s “Titanic”.

The book is split over six parts and twenty chapters. Part 1 focuses on the last 100 years and how the Titanic has become a legacy. This ranges from the building, to its board members and even the menu on the ship. Part 2 deals with unfortunate sinking of the ship. It focuses on its collision, the survivors (including first hand accounts), the news coverage and its investigation. Part 3 explores the mystery of what went wrong and many other unanswered questions for the final hours of the ship. Part 4 deals with the journey to revive the sunken ship wreck. Part 5 takes a look into how the Titanic has been explored in pop culture. Lastly the final part is called “The Parts of Tens” and focuses on ten artifacts, myths and documentaries about the Titanic.

If you are familiar with other “For dummies” book then this one is really no different, expect it is a very interesting read. I have read many of these but they are usually about computer or technology and more for necessary knowledge and not pleasure. I really enjoyed reading this and I will look forward to spread this book around to others who will also able to enjoy it. If you are unaware also this April, James Cameron’s “Titanic” is being re-released in 3D to commemorate the 100th anniversary. This topic is one that will never fade away and never forgotten through time.

One Reply to “Book Review “The Titanic For Dummies””