Who doesn’t love Kevin Bacon, the original “Footloose” is definitely a classic, but this remake really holds its own. It is packed with more heart and a better laid out story. The film runs almost two hours but is so fast-paced, you don’t even feel it. You will also notice though that this remake aims plenty of odes to the original film, especially with the opening scene and various outfits throughout.  There is more back story in the beginning of the film explaining the accident that caused the ban of dancing, which was just a mention in the original. All-in-all, if you love the original that’s fine, but this definitely takes the classic and pumps it up a little.

The music is the film is extremely infectious, with the exception of one song. Holding Out for a Hero” remade by Ella Mae Bowen is absolutely dreadful. They took one of the most energetic songs and made it into a sleepy ballad. “Where The River Goes” by Zac Brown was even nominated for a Grammy it is so good. As much as I like Kenny Loggins, “Footloose” by Blake Shelton is quite a bit of fun as well. Fans of the 80’s don’t fret, also included are original tracks like “Bang Your Head (Metal Health)” by Quiet Riot and the original “Let’s Hear It For The Boy” by Deniece Williams. Music is very important in this film and it does not disappoint.

Props need to go to the film’s acting as I enjoyed every performance. Dancing with the Stars’s Julianne Hough did an amazing job and obviously we all know that she can dance. Kenny Wormald is not a huge name but he sure knows how to dance also having toured with Justin Timberlake and The Pussycat Dolls. Dennis Quaid gave a very emotional 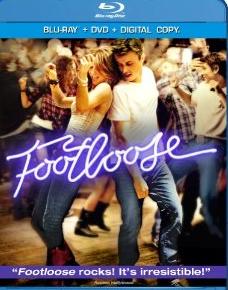 performance. The underdog performances needs to go to Miles Teller, who played Willard, since he got all the good laughs in the film.

The Blu-ray presentation is very impressive. The video is extremely sharp and packs a crystal clear picture. Most importantly, the sound is excellent featuring an DTS-HD MA 5.1 track and it really scores with the music in the film. Also included with the Blu-ray is a DVD copy of the film and an Ultraviolet digital copy of the film as well. This new feature enables you to watch the film streaming wherever you want like on your smart phone or online. Really great feature!

The special features are also very notable. There is an audio commentary with director Craig Bower. He discusses every aspect of the film from coming on board to completion, great listen. “Jump Back: Re-Imagining Footloose” focuses on the original film with comments from the cast and crew and its remake process. “Everybody Cut: The Stars of Footloose” focuses on the cast of the film. “Dancing with the Footloose Stars” is a great features and focuses on the film’s dance choreography. There are about five short deleted scenes with optional director commentary, worth a watch but nothing amazing. There are various music videos including “Footloose” by Blake Shelton, “Fake ID” by Big & Rich and “Holding Out for a Hero” by Ella Mae Brown. Lastly there is a video from Emily Whitcomb doing a Footloose-inspired Rap. Overall great features for an awesome film.