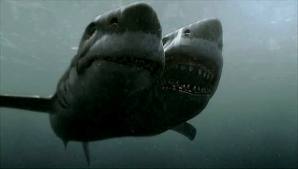 With a title like “2 Headed Shark Attack”, you know that you just have to have fun with a film like that. Either love it or hate it. The cast alone is a riot including Carmen Electra, Brooke Hogan and Charlie O’Connell. Carmen is useless in the film and just poses and tries to act hot, but fails. Brooke is actually pretty kick-ass, campy, but still kick-ass. Charlie O’Connell is probably the worst of them all. But we come back to the point again, you don’t watch a film like this for the acting. You watch it for the cool shark and fun kills. That is exactly what you get in this film, nothing more…nothing less.

Does the plot even matter? There is a 2 headed shark attacking people and it is as simple as that. In case it matters to you, the film follows a group of college students and their professors that get stranded on a isolated island during a school boat trip that goes wrong. They find out that the island is actually sinking and they are being hunted by a shark that has been genetically mutated and it has…wait for…2 heads.

The shark visual effects are decent when it is in the water. It actually comes up with some creative kills, for example two girls water skiing and the shark pops up behind them ala “Jaws 2” and each head picks off a girl. Simple cheesy laughable fun. The practical shark effects when it is shown out of the water are damn terrible and it is just a puppet and doesn’t even move. I think that is a very poor choice and it should have stuck with sorely CG effects.

The Blu-ray presentation itself is good for and the video is sharp and showcases the effects well. Surprisingly the sound is also good sporting a 5.1 audio surround track. The special features though are a little lacking though with a very brief gag reel, which is passable. There is also a brief featurette on the making of the film, it is worth watching just for the visual effects park about the sharks. I enjoyed that quite a bit. Overall this is just another cheesy creature feature film ala “Mega Shark vs. Octopus” and “Mega Shark”. Watch it, tune out and enjoy.