Adult Swim, which is the more mature programming on Cartoon Network, will be airing “Let’s Do This” this month online, which is a new live-action comedy pilot created and produced by Bob Odenkirk, Brian Jarvis and Jim Freeman.. The show resolves about Cal McKenzie Goldberg (Odenkirk) who is running a movie studio, Cal-Gold Pictures, in a strip mall in North Hollywood. In the pilot, Cal is hired to make a wizard movie from an Uganda drug lord. You can only imagine how that turns out. 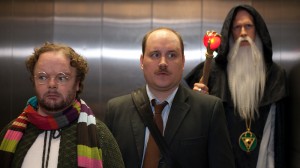 Bob Odenkirk is known best for his skit series “Mr. Show with Bob and David” with David Cross. He has worked on Adult Swim shows like “Tom Goes to the Mayor” and “Tim and Eric Awesome Show, Great Job!” He has also has recurring roles on TV shows like “How I Met Your Mother” and “Breaking Bad”.

We will be posting a link on Media Mikes to let you know when you can check out this show. If you like it please let Adult Swim know that you would like to see this pilot turn into a series. I have seen the pilot and it is very funny and definitely has a lot of potential.