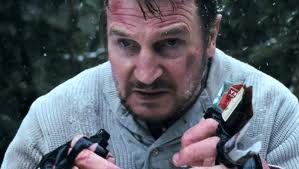 Way up in the Alaskan frontier, a group of men work on an oil pipeline. Unseen by all is Ottway (Neeson), whose only job is to look through a rifle scope and shoot ANYTHING that threatens the workers. Longing for his wife, Ottway and a group of men board a plane for Anchorage. When the plane crashes, stranding all who survived, the frozen north becomes the least of the problems for Ottway and his companions.

Directed with the eye of a master, “The Grey” tells the story of what happens when the hunter becomes the hunted. Brimming with suspense and more than a couple heart-racing scenes, “The Grey” is this 2012’s annual, beginning of the year, Liam Neeson movie. Luckily, like “Taken” and “Unknown” before it, the film is well worth seeing.

Anchored by one of Neesons strongest performances ever, “The Grey” delivers two tones…dark, when the men are struggling through thigh-high snow, and darker, when they huddle together near a slight fire, ever wary of the pack of wolves that has followed them since the plane crash, slowly winnowing the group down as, one by one, the men prove no match for their furry adversaries. As their journey to find civilization drags on, Ottway ensures that Hendrick (Roberts) collect the wallet of each man who succumbs, be it to the wolves or the cold. As the film progresses the knapsack full of wallets continues to swell.

Director Carnahan, whose previous films include “Narc” and the updated version of “The A-team,” continues to add on to his growing resume’ of action and adventure. Each scene is shot with an eye that belays Carnahan’s relative youth behind the camera. The excitement is heightened by the nastiest set of wolves you’ll ever seen, courtesy of maestro’s Greg Nicotero, Howard Berger and the crew at KNB EFX Studio. Come for the wolves, stay for Neeson. His performance is so strong that director Carnahan has already hinted the film will be re-released in October 2012 to gain the Irish actor award consideration.