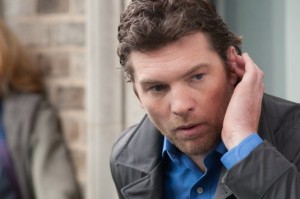 Life isn’t going well for Nick Cassidy (Worthington). A former cop currently serving 25 years in prison for theft, Nick must deal with the constant beatings his fellow inmates dish out and the fact that his father is dying. Nick claims he’s innocent, of course. And if can find a way out he’d be happy to prove it. If only…

Formulaic to the point of boredom, “Man on a Ledge” is a ho-hum case of “Crime Caper 101” with a few decent set pieces to keep your attention. The blame here clearly rests on the shoulders of screenwriter Pablo Fenjves, whose previous claim to fame was having the misfortune of living next door to Nicole Brown Simpson the night O.J. came to call. After a string of television projects this is Fenjves’ first feature film and the script is cobbled together from the best (and worst) parts of every heist film ever made. Let me run down the checklist:

1. Fake security guards by putting a still photo in front of a video camera. Check.
2. People who have no business being able to hack computers and repel down walls but manage to do it effortlessly. Check.
3. Really hot chick who can do all of the above but for some reason buys her clothes two sizes too small. Check.
4. Same girl removes said clothes in the middle of the film to reveal even smaller undergarments. Check.

The cast tries hard to convince you they care. Worthington is likable as Nick. As the police expert that is called in to talk to Nick once he becomes the title character, Banks is sharp. She’s carrying some emotional baggage from a previous case and Banks wrestles with that baggage well. Ed Harris shows up to chew some scenery as “the bad guy,” obviously having fun with the role. Jamie Bell as Nick’s brother, Joey and Genesis Rodriguez as his girl, Angie, have some chemistry and some cute back and forth banter. Which reminds me:

5. Cute back and forth banter between boyfriend/girlfriend crooks. Check.

The only casting miscue arrives on screen when Kyra Sedgwick, her southern accent as thick as molasses, announces herself as television reporter Rosie Morales! This is director Leth’s first feature and he shows some talent behind the camera. Hopefully he’ll try something more original for his sophomore effort.