Once again it’s time to put the turkey in the oven, loosen our belts and plan our weekly trips to the multiplex. Its holiday time and the studios are pulling out some of the big guns to keep you entertained. Once again, MediaMikes is pleased to preview some of the films you can look forward to seeing in the next two months. As always, opening dates are subject to change at the studio’s whim.

It’s a battle of great minds when Sigmund Freud (Mortensen) and Carl Jung (Fassbender) duel over a disturbed patient (Knightley). Cronenberg and Mortensen have teamed up twice and produced some great films (“A History of Violence” and “Eastern Promises”). I’m expecting a hat trick here.
OSCAR CHANCES: Mortensen earned a Best Actor nod for “Eastern Promises” and Fassbender is coming off a career making performance in “X-men: First Class.”

When Santa Claus accidentally misses one child on his rounds his youngest son, Arthur, attempts to correct the problem.
OSCAR CHANCES: Don’t see it on the short list for Best Animated Feature.

In the 1920s an actor (Dujardin) falls for an upcoming actress (Bejo). This film is silent and was nominated for the Palme d’Or at this year’s Cannes Film Festival, where Dujardin was named Best Actor.

OSCAR CHANCES: The last silent film to win an Oscar was the first, “Wings.” Look for that to change soon.

In 1930’s Paris, a young boy who lives in the train station hopes to unravel a secret involving his late father and an automatron. Scorsese plus 3D? Can’t wait.

OSCAR CHANCES: With a director like Scorsese you can’t count this film out.

A fan of the felt covered group (Segel, who also wrote the screenplay) tries to reunite the Muppets in an attempt to stop a greedy oil tycoon (Cooper) from buying and demolishing their old theatre. Some of the original Muppet 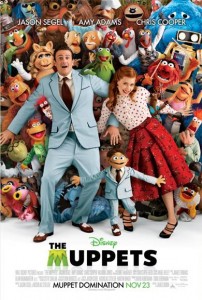 performers, including Frank Oz, declined to work on this film. But Segel has been a lifelong fan and I don’t think he’d do anything to harm the franchise. Director Tobin is making his feature film debut after having helmed many episodes of “Da Ali G Show” and “Flight of the Conchords.”

OSCAR CHANCES: To quote Johnny Carson while addressing Miss Piggy, the only Oscar award she’d ever win would be from Oscar Meyer.

A young man working on his first film is assigned to look after Marilyn Monroe.
Williams totally immerses herself in the role as does Branagh, who co-stars as Laurence Olivier.

OSCAR CHANCES: A possible nod to Williams for Best Actress.

Fiennes makes his directorial debut with a modern-day retelling of the Shakespearean story of a Roman war hero who loses his power and must eam up with his enemy to lead an attack on those who betrayed him.

OSCAR CHANCES: Fiennes could be a double threat.

A sex addicted man (Fassbender) has to come to terms with who he is when his younger sister comes for a visit. The film has been rated NC-17 so you may be hard pressed finding it. Director McQueen is English and no relation to the late actor.

OSCAR CHANCES: NC-17 means not a lot of theatres will be playing it so unless everyone in Hollywood gets a screener it doesn’t appear likely.

I MELT WITH YOU
Starring: Thomas Jane, Rob Lowe and Jeremy Piven
Directed by: Mark Pellington

When four friends from college have a reunion they are reminded of an old pact they once made with each other.

From the people that brought you “Valentine’s Day” comes another celebration day. Can “Cinco de Mayo: The Movie” be far behind?

Hill stars as a college student on suspension who is coaxed into babysitting the kids next door. Foolishly, he takes the kiddies with him to New York City. For fans of Hill, this is the last “chubby” film you’ll be seeing him in. If you’ve seen his video game commercial or the trailer for “21 Jump Street” you’ll notice he’s dropped some serious poundage.

OSCAR CHANCES: Unless they give them for weight loss, no.

Retired from Britain’s MI6, George Smiley (Oldman) embarks on a mission to expose a mole in the organization. Oldman takes over the role played by Sir Alec Guinness in the 1979 film.

Madonna directs this romantic drama focusing on the affair between King Edward VIII and American divorcée Wallis Simpson as well as a contemporary romance between a married woman and a Russian security guard. Madge also wrote the screenplay with her “Truth or Dare” collaborator Alex Keshishian.

OSCAR CHANCES: Judging from the early reviews I’d have to say no. However, there’s always the Golden Raspberry awards.

When her teenage son (Miller) goes on a killing spree at school, his mother (Swinton) must deal with her grief and her feelings of responsibility.

A New York City pickpocket learns he has a child from a long ago romance. Star Facinelli also wrote the screenplay.

On a luxury cruise the boys and their Chipettes find themselves marooned on a not-so deserted island. Director Mitchell helmed the last “Shrek” film.

The parents of two school boys, one family upscale the other middle class, meet to discuss their son’s schoolyard fights.

OSCAR CHANCES: Hell Yes! With the exception of Reilly, who was nominated for “Chicago,” everyone I’ve mentioned above has at least one Oscar on their mantle.

After the IMF has been disavowed by the government, Ethan Hunt (Cruise) leads a new group of agents to investigate a bombing of the Kremlin. Director Bird tries his hand with live action after having directed the animated masterpieces “The Iron Giant” and “The Incredibles.”

Holmes does battle against his greatest nemesis, Professor Moriarty. Also stars the original “Girl in the Dragon Tattoo,” Noomi Rapace.

THE ADVENTURES OF TINTIN
Starring the voices of: Jamie Bell and Daniel Craig.
Directed by: Steven Spielberg

Master Spielberg tries his hand at motion-capture animation, throwing in a little 3D for good measure. There are over 20 “TinTin” classic comics so if this is a hit I’d expect more.

OSCAR CHANCES: Since the Academy ruled recently that motion capture films don’t qualify for the Animated award, unless John Williams’ score gets a nod I’d say no.

In order to make a living in 19th century Ireland, a woman disguises herself as a man. Thirty years later she is still living a lie.

OSCAR CHANCES: Critics who have seen this film call it Close’s greatest performance.

The director of “The Social Network” and “Fight Club” takes on one of the most popular novel series in history. He’s also taking on the audiences pre-conceived ideas as to how the story will unfold.

OSCAR CHANCES: I haven’t read the books or seen the previous films. The trailer has had me excited for quite awhile. I’m saying at least two nominations. Do I hear three?

IN THE LAND OF BLOOD AND HONEY
Starring: Zana Marjanovic and Goran Kostic
Directed by: Angelina Jolie

Two people fall in love during the 1990s civil war in Bosnia. Not only is Jolie making her directorial debut she also wrote the script.

OSCAR CHANCES: None to speak of.

After his father is killed on 9/11 a young boy finds a mysterious key and must find out where it goes.

An adaptation of the children’s novel and the currently running Broadway show, the story revolves around a farm horse sent into battle during World War I and the young boy who tries to get him back.

OSCAR CHANCES: Across the board. 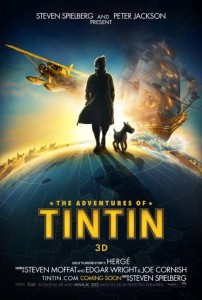 A Brooklyn teenager must deal with disappointing friends and family when she attempts to embrace her lesbian identity.

OSCAR CHANCES: This film has been raved about since it premiered at Sundance earlier this year. It could be this year’s “Precious.”

A small town father tries to care for his young son and alcoholic wife. Tragedy strikes when the young boy disappears in a snow storm.

A look at Margaret Thatcher, the former English prime minister.