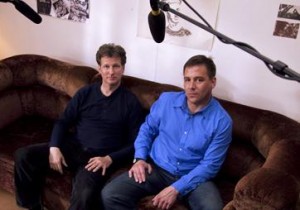 Eddie Lee Sausage & Mitch H. are the guys behind the audio vérité recordings of Peter J. Haskett and Raymond Huffman, which turned into cult comedy tape series “Shut Up Little Man!”. The tapes were released commercially in 1992 and since has blown up in this phenomenon which latest spawned a documentary about the guys “Shut Up, Little Man! An Audio Misadventure”. Media Mikes had a chance to chat with Eddie Lee Sausage & Mitch H. about the film and also this cult phenomenon.

Mike Gencarelli: Where did your involvement begin in terms of the documentary?
Eddie Lee Sausage: I received an email from Matthew Bates, who was the director of the film. I started off by telling that we had been approached several times before about doing a documentary. What I had done with those who had asked in the past was to have them send me some of their previous

work. The stuff I received prior to this was so wretched that I didn’t think the project would work. Matt sent me some of his previous films, which I thought were exceptionally well done. I thought Matt’s style was something that could really work and had a lot of potential.

MG: What was it like revisiting all the tapes and photos for the documentary?
Mitch H: The first place we shot was in Wisconsin. We had a lot of fun shooting there. I have a pretty extensive collection of photos all cataloged, so I gave those to the guys to use. They ended up scanning quite a few of the photos from that era.
ELS: The “Shut up Little Man!” phenomenon seems to come in waves. A lot will happen for two years then nothing seems to happen for three years. I had taken about a year and a half starting in 2008 putting together a detailed website www.shutuplittleman.com. I put up all of the stories, videos, artwork and photos I had gotten from Mitch on that site. Within about six weeks of the site going live Matt called about the documentary. It was a great time to do it because everything was still fresh in my mind from working on the website.

MG: What has been your response towards the recognition the film is receiving? 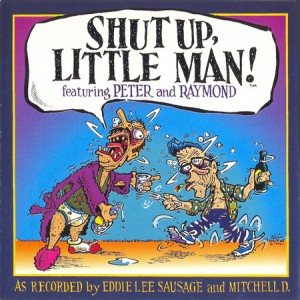 MH: I am still in awe. I never expected the film to do so well. It’s been a lot of fun and a wild ride. Everything is just very surreal.

MG: Have you guys attended any of the screenings?
ELS: We attended the screening at Sundance as well as the one in San Francisco and a number of others. We have got to meet a lot of great people and be a part of some fun Q and A’s. It’s really been a lot of fun.

MG: Going back in time how do you feel the things in the film would relate to pop culture if they were done today?
MH: It’s hard to say what the end result would have been if we were recording this material today. It might just be here and gone. In the mid 90’s, you had to have something tangible. You had to have a cassette tape in your hand that you could give to someone. It’s wasn’t like today where you have something in a PDF format and you just email it. I think things would have been immensely different.
ELS: Ray and Peter are extremely unique. It’s not just another neighbor or any other drunk. There is something hilarious about the two’s personal dynamic. These two are beyond any standard loud next door neighbor.

MG: Do you guys still listen to the tapes today?
ELS: I go through waves of listening to them. When we released to full tapes in 2008 I didn’t

ever really want to listen to the things again! I had been personally doing a lot of the engineering at that point. Mitch and I live half way across the continent from each other and probably every other day or so we end up texting a line or two from “Shut Up Little Man!” It lives on that way.

MG: What do you think is next for “Shut Up Little Man!”
ELS: Were hoping to do commemorative statuettes of liquor for Peter and Ray (Laughs). I’m joking. Maybe bobble heads or a clothing line with dried vomit on it. There are a lot of marketing ideas [laughs].