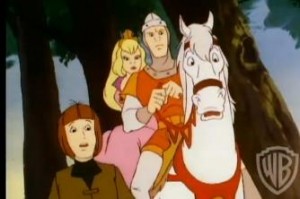 “Dragon’s Lair” was always an interesting type of arcade game especially since it had you choose you own path and your decisions in the game reflected different results. Now if your wondering how that transfers to a television show, obviously not totally well. The show does present different scenarios that could happen for our hero and it fun because it is usually before a commercial break, so it leaves you waiting to see what happens.  Honestly though, the show has dragons, princesses and knights…and what else do you want in an 80’s cartoon. I think it works for me.

In case you haven’t heard of this show that is due to the fact that it only last 1 season of 13 episodes. The show is well done by the Hanna-Barbera team and the animation is decent for mid-80’s. The voice work is completely over the top and reminds of “The Legend of Zelda” TV series. This DVD release is the first time that this series is seeing the light of day, thank you again Warner Brothers Archive. In general the show is fun and mindless. It is not the best series that ever came out of the 80’s but it is also not the worse.  No extras are included on the disc, which is OK because at least we got the complete series, not a volumized set.

Synopsis: The legendary videogame Dragon’s Lair was a blockbuster (and 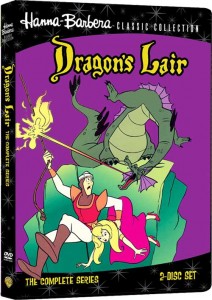 quarter guzzling) sensation when it first debuted, spawning sequels, imitators, and a beloved Saturday morning cartoon series. Developed by the powerhouse animation crew put together by Joe Ruby and Ken Spears, the Dragon’s Lair cartoon made many contributions to the Dragon’s Lair saga, from naming the Dragon “Singe” to rounding out the cast with such memorable supporting players as Bertram the horse (voiced by animation legend Peter Cullen) and Timothy the squire (voiced by Michael Mish). Mimicking the action of a videogame, Dragon’s Lair pauses the action and asks the audience which action Dirk should take next in his never-ending quest to protect the kingdom of King Ethelred and his beloved Princess Daphne. But enough talk! Dirk the Daring faces doom throughout this 13 episode, 2-disc set and he needs YOU to help him decide what to do next!

The DVD is now available at the Warner Archive: http://bit.ly/WB_DRAGON