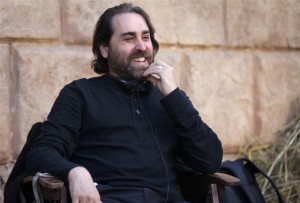 Steven R. Monroe is the director of the new SyFy Original, “Jabberwock”.  Steven is no stranger to SyFy films, as this is his fifth film for them.  Steven also directed the 2010 remake of “I Spit On Your Grave”. Last year, Media Mikes got a chance to chat with Steven about “I Spit On Your Grave”, read here, but this year we got to chat about “Jabberwock” and his new film “MoniKa”.

Mike Gencarelli: Last time we spoke you couldn’t talk about “Jabberwock”, so give us the scoop about the film?
Steven R. Monroe: Yes, actually I did not have a contract yet so sorry about that.  “Jabberwock” is the tale of one small village in the 15th century where two brothers live. One a blacksmith and one a warrior, their relationship and lives are tested when a newly born creature that appears to be possibly the mythical Jabberwocky invades and terrorizes their lives and people. Tahmoh Penikett who is just a bad ass actor plays the older brother and Michael Worth plays the younger warrior. They end up banding together of course to slay the creature but I love that there is not only a period element to the film but a human one along with the action and suspense of the story.

MG: How much does this film reference “Alice in Wonderland”?
SM: There is some but not a whole lot. The poem is referenced by the character played by Steve Waddington, “John”, who is the village wireman. It comes to him that the flying creature that is terrorizing their village sounds a lot like the one in the poem.

MG: How was the production compared to your other SyFy Original Movies? 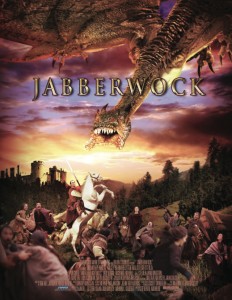 SM: It was definitely different because we shot in Bulgaria. Most of the other ones I have directed have been shot in Canada. Also it was my first time working with American World Pictures. What was still similar to me was that I was directing a SyFy Original and this was my 5th one for them. I enjoy working with everyone there although we have never all sat in the same room, we have had a 6 year conference call relationship. They are in New York and I am either in L.A. during script development or another country for production. Outside of that, for production you deal with a lot of the same things, same shooting schedules, and close to the same budgets.

MG: You have directed numerous SyFy Original Movies, what do you like most about working with them?
SM: Well I do get criticized a lot from mostly internet media and genre fans because I do both feature films and television movies but that is exactly what I like about it and who would not want to be able to do a film like “Jabberwock” where you get to go to eastern Europe and film with swords and horses and bows and arrows and live that dream I had as a young boy of making movies. Playing with Dragons and Ogres or Death Worms or Tornados,  Shooting up or blowing things up…come on it’s a dream come true for me. And then I also get to go do films with Drama or Horror or action for the screen. I think the exact thing these people are making fun of is probably envied by some in my profession by people that only get to do one thing, one format, one genre. So I let people do their goofing on me in print because really they just keep pointing out something I think is lucky for me. I think it just gives people something they think is funny to goof on “how did the guy who directed “Ogre” and “Ice Twisters” get to direct “I Spit on Your Grave”? Well do your homework because I also have directed 7 other feature films and I like doing SyFy movies, Oooo is that so horrible? Apparently, People always seem to have this warped idea that filmmakers should just sit around and only do the perfect projects, it’s not that simple and most of us are no different than anyone else, this is our job and we need to work, we have bills and families just like everyone else You do your best to do the best, but if life was that easy my name would be Terrence Malick. 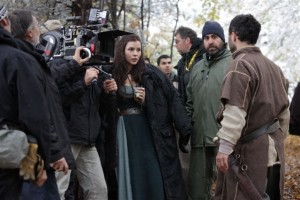 MG: You tend to work with similar people on your films like Cerina Vincent, Elisa Donovan, Michael Worth and Tim Thomerson; tell us about this?
SM: Yea I do. It’s another thing that I feel lucky about in my career. I am not the only director that does that. I do the same with crew also, before he passed away after we did “I Spit On Your Grave” my Cinematographer and close friend Neil Lisk had done 5 films with me, my Composer Corey Allen Jackson (who also did the music for Jabberwock) has done 7 with me and my editor Kristina Hamilton-Grobler has done 5 or 6 I think. So I like to find people that I not only trust or respect but that understand me as a director and how I think and work. Also for me when you doing a low budget film and you have people you know you can rely on to deliver it is invaluable. I love Cerina we have done 4 films together now, Thomerson is awesome and just makes me laugh all day and we have done I think 4 now also, Michael Worth and I go back really far and on the film  we hit it off. Michael and I think the same and we want the same things with our careers. He is also a very talented writer and director and I have all the respect in the world for him. He is like a brother and this film “Jabberwock” would have suffered without him. He is an amazing fight guy and he choreographed the sword fights for us and he and Tahmoh just knocked it out of the park. I could not have gotten those scenes shot if it were not for them and Michael’s experience.

MG: Going back to the early years, you worked on “Pee-Wee’s Playhouse”; any fun stories?
SM: You don’t have the time, it was all fun stories. Every day and Paul Reubens is a genius and a great person. I never had so much fun in my 27 years so far in the business for that year of my life. I was only 25 I think at the time. It was a blast.

MG: What can you tell us about your upcoming project “MoniKa”? 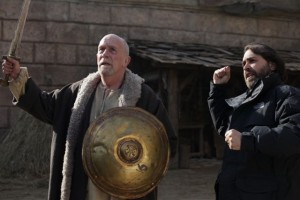 SM: It’s an Action/Thriller about a guy who goes to visit his actor friend in Las Vegas and meets the perfect woman, they have the perfect night, and then he finds out that she was actually killed the night before they met. He has visions and premonitions that help him piece the puzzle together but he gets caught up in her vengeance for the death of her little sister on some local crazy drug dealers when Monika comes back, kind of like an undead to finish her revenge. It’s a really edgy, violent, good guys/girl vs. the bad guys’ kind of rollercoaster film. Cerina Vincent plays Monika who a gun slinging bad ass, and Jason Wiles plays Reagan the guy who tangled up in everything with her. I also have some of my I “Spit” cast being different kinds of bad guys in this one. I wrote and produced it too so it was really different for me to be able to be the final say in everything which does not happen too much anymore these days probably much to the surprise of film fans. It will be finished the end of September and everyone is really excited.