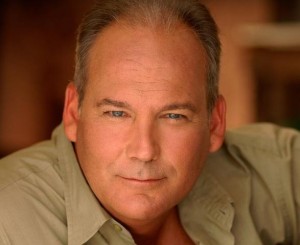 Brett Rice co-starring in this year’s hit “Super 8”. He is also co-starring in this Fall’s remake of “Footloose”. Besides movies, Brett also appears on TV series “The Glades” and “Magic City”. Media Mikes had a chance to chat with Brett about his various movie and TV roles.

Mike Gencarelli:  Tell us about your experience working on “Super 8.”
Brett Rice:  Working on “Super 8” was incredible.  Absolutely incredible.  I actually started filming in early December of last year.  I dropped for a little bit to do a pilot I was shooting.  The day after the pilot was finished I was back on “Super 8.”  We sometimes worked 16 hour days.  J.J. Abrams is a lovely man.  And a genius.  I’ll give you an example.  There’s a scene in the film where I, as the sheriff of the town, go into the gas station and talk to the young man behind the counter.  When I come out all of these weird things start happening and a pack of dogs comes running across.  That was not originally in the scene.  It’s two o’clock in the morning and J.J. at the last minute thought “wouldn’t it be funny if these dogs went running by?”  So he had the wranglers go out and an hour later we had a pack of trained dogs to run in front of me.  That’s the power of J.J. and the studio.  It was a brilliant idea that kind of made the scene.

MG:  Tell us about your character in the film, Sheriff Pruitt. 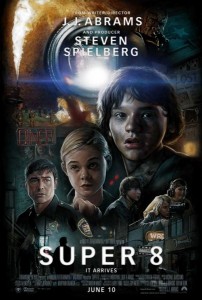 BR:  He’s the sheriff of a small town where a bad train accident happens.  He doesn’t know much about it.  The deputy sheriff comes in and starts talking about these weird boxes…cubes…and I just blow him off.  “Go home and hug your kid,” I tell him.  And the next thing I know I’m out in the middle of nowhere at a gas station and I get abducted.  The creature has taken several people and he does what he does with them.  I mean it’s really no secret that he eats them.  My character survives and I help lead the kids out of a maze.  But, as often turns out in these wonderful films, the kids know more than the adults.  SPOILER ALERT:  So I get taken away at the end and killed.  The kids survive.

MG:  The film is said to have a very Amblin feel to it.  Did you think that during the production?
BR:  Oh yes.  Once we went to the secret lair where the creature was you had that feeling of “E.T.” or several of Spielberg’s other films.  The way J.J. shot it…once you saw it on screen…you automatically had a feeling of Amblin Entertainment.  Like E.T. going across the moon, the film is dark.  The lair is somewhat lit but it’s still dark.  It’s just a great combination of great cinematography and direction.

MG:  What can you recall from working with Tim Burton on “Edward Scissorhands”?
BR:  He’s a wild man (laughs).  He’s a mad genius.  I worked with him one day and he probably spoke to me three or four times.  He had this long, frizzy hair…skinny guy.  At first I didn’t know who he was.  Someone told me he was Tim Burton but I didn’t know anything about him at that time.  During my off time I go into the house and here comes Johnny Depp in full regalia.  Scissors and everything.  I’m looking at the strange creature and I’m curious because I’d only been given two pages of the script to read.  I look at Johnny Depp and I think to myself “what in the hell have I gotten myself into?”  I look up and down the street and I see all of these houses painted in pastel colors with the lawns manicured perfectly and I’m thinking “what in the hell is this movie all about?”  But Tim was great to work with.  He knew what he wanted.  He never had to raise his voice.  He was kind.  And of course, you see what he’s created over the last 25 years…he has earned the nickname “Mad Genius” of entertainment.

MG:  You currently appear on the TV show, “The Glades.”  Tell us about that? 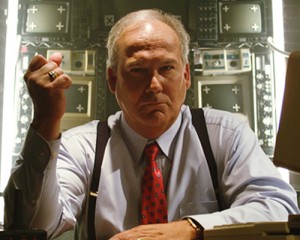 BR:  The star, Matt Passmore, is Australian but what an amazing American accent he’s developed.  When I met him I didn’t know he was Australian until we sat down and talked between scenes.  I said, “you’re not from around these parts, are you?”  My wife Candy was the costumer on the pilot and she was telling me about how nice the crew was.  So when I got on the shoot about a month ago I was really, really impressed.  It’s a first class operation.  Working in the heat of Miami…when I got there Matt said “welcome to hell.”  You’re shooting in the heat and humidity of the summer in Miami…he was right on that account!  But they’re a group of lovely people.  I’ve had great fun with Matt.  About a month before that I had gone to Portland, Oregon to shoot “Leverage.”  I had sent a tape off and they booked me off the tape.  So they flew me to Portland, which is a great city.  Sixty seven degrees…it was drizzling all the time.  But perfect weather for me because I like it a little chilly.  I got to work again with Timothy Hutton, who I had worked with in “Sunshine State.”  He’s a lovely man.  I’ve been so lucky in that on all of my projects the cast and crew, including the directors, have been so friendly and so giving.

MG:  Tell us about your recurring role on the upcoming Starz television show “Magic City”?
BR:  I’ll tell you what I know…we’re on the second episode right now and we’re doing, I believe, thirteen.  It takes place in 1959 Miami.  Paramutual gambling has already been well established with the government.  Horse tracks. Dog tracks.  Jai Alai.  One of the local Mafia groups has built a hotel and they’re trying to get a casino….which is what the hotels there are still trying to do today.  This has been going on for over 50 years down there.  This group is trying to get casino gambling approved in the state of Florida.  My character is a conservative Republican senator…very right wing…from Tallahassee who gets in bed with the paramutual gambling and does not want to help the hotels get casinos.  I can’t really give away too much more about it but that’s the gist of what is going on.  Casino gambling wants to come to Florida in 1959.  It’s the year of the Rat Pack…Sinatra and Dean Martin.  It’s going to be outstanding visually as well.  From what I’ve read it’s going to be a very intriguing story.  Very

MG:  Tell us about your role in the remake of “Footloose”?
BR:  I just attended a special screening of it and I was mesmerized by it.  It’s going to be a huge hit.   It opens in October and it’s going to be a hit with my generation, the ones that grew up with the original film.  The music has been contemporized.  This film is about 65% of the original film, though like the songs some of the dialogue has been contemporized.  The tractor “chicken” scene is a little different…there’s a different kind of vibe to it.  It’s going to be thrilling to watch.  The dancing is modern and the music is incredible.  Very contemporary.  From hip hop to rock and roll.  My character is the principal of the high school as well as the president of the city council.  I’m one of the instigators of the law that forbids dancing in town.  I suggest that anyone that’s thinking of seeing the film to do so and prepare to be amazed.  And the kid that plays Willard, who was so memorably played by Chris Penn in the original, is going to steal the show.  His name is Miles Teller and he is one hell of an actor.  Miles is the up and coming next big star.  I’ll tell you that right now.