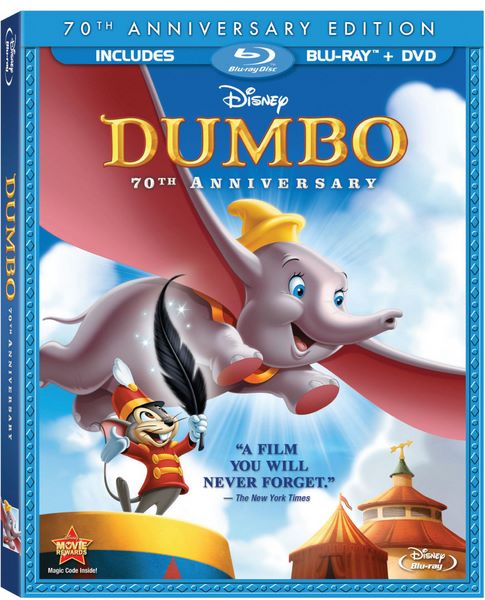 To celebrate Disney’s 70th Anniversary Edition Blu-Ray™ release of “Dumbo”, Media Mikes would like to giveaway 10 copies of the Blu-ray™ Combo Pack (Blu-ray™ + DVD). If you would like to win one of these great prizes, please leave us a comment below or send us an email and let us know your favorite Disney song. This giveaway will be open until Monday September 26th at Noon, Eastern Time and is only open to residents of the United States. Only one entry per person, per household; all other entries will be considered invalid. Once the giveaway ends, Movie Mikes will randomly pick out winners and alert the winners via email.

Walt Disney Studios Home Entertainment invites audiences to let their spirits soar with the release of the beloved animated classic Dumbo, for the first time ever in high definition as a 70th Anniversary Edition, coming on September 20, 2011. The Academy Award®-winning (1942, Best Music, Scoring of a Musical Picture) favorite will take flight for the first time with a premium restoration in stunning Blu-ray™ high definition featuring pristine 7.1 Digital Theater System High-Def Surround Sound, allowing fans to see more, hear more, interact more and share more of this timeless adventure about believing in yourself.

Film Synopsis
In celebration of this landmark film‘s 70th anniversary, experience the daring adventures of the world‘s only flying elephant with a dazzling all-new digital restoration and brilliant Disney Enhanced High Definition Theatre Mix Sound. The inspirational tale of Dumbo, the courageous baby elephant who uses his sensational ears to soar to fame with the help of his clever best friend Timothy Q. Mouse, will thrill and delight audiences of all ages. And now, the award-winning music and empowering messages about friendship and belief In yourself reach new heights in this must-have Blu-ray high-definition presentation of Walt Disney‘s classic Dumbo!