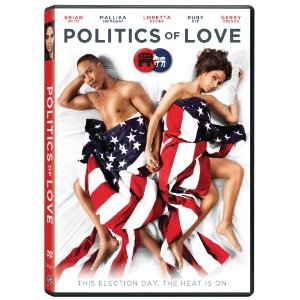 UNIVERSAL CITY, CA – Opposites attract and sparks fly in the bi-partisan romantic comedy Politics of Love. After an initial theatrical release set to begin in August,
Politics of Love will premiere on Comcast and Time Warner Cable’s Video On Demand systems September 1st and on DVD September 13th from Codeblack Entertainment. Politics of Love features hot new stars on the rise Brian White (Tyler Perry’s forthcoming feature Good Deeds) and Bollywood bombshell Mallika Sherawat (Murder). Sherawat, an accomplished Indian actress with a trailblazing attitude and fearless commitment to confronting social stigmas, is known for pushing boundaries and taking risks with the roles she chooses while at the same time bridging cultural divides. White is not only known for his work on stage, television and film but also for his activism within the community and dedicating his time and efforts to empowering youth though his charitable organization Black Carpenter. Politics of Love also stars Loretta Devine (For Colored Girls, Crash, “Grey’s Anatomy”), Oscar Nominee* Ruby Dee (American Gangster) and Gerry Bednob (The 40 Year Old Virgin).

The world’s hottest election gets even hotter when a sexy, savvy African-American conservative Republican, Kyle Franklin (White), meets a beautiful Indian-American Obama campaign volunteer, Aretha Gupta (Sherawat) and sparks fly inside and outside of the office. As the campaigns intensify, can the power of love conquer all for this mismatched pair of lovers in the electrifying days leading up to Election Day?

With a compelling message about the need for unity and understanding—both in politics and relationships—Politics of Love strikes a chord whether you’re a conservative, liberal or somewhere in between. The film will be available On Demand through digital cable and satellite TV (check your local listings), and on DVD for the suggested retail price of $19.97.

Politics of Love can be seen in select theatres August 26.

Politics makes strange bedfellows, but never stranger than when a sexy, savvy, African-American conservative Republican reluctantly falls for his Democratic counterpart: a beautiful Indian-American Obama campaign volunteer. Sparks fly, tempers flare, heads turn, and romance blossoms for his mismatched pair of lovers in the frantic and intoxicating days leading up to Election Day. Can the politics of love conquer all?