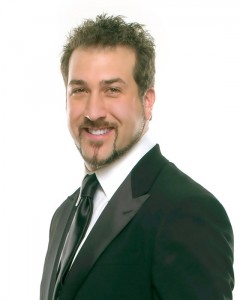 Joey Fatone is known best for being a member of the band *NSYNC, but it is after the band was when Joey’s career has really taken off. Since then, he has been in movies including “My Big Fat Greek Wedding” and the upcoming horror film “Inkubus”. On TV, you can’t forget his “Star Wars” Tango on “Dancing with the Stars” and kids will remember his appearances on “Imagination Movers” and “Hannah Montana”. Joey is also hosting “Karaoke Battle USA” this summer on ABC. Media Mikes had a chance to chat with Joey about his upcoming films, his television work and his new hosting gig.

Mike Gencarelli: Since *NSYNC, You have been focusing on movies and TV, do you prefer one of other?
Joey Fatone: I enjoy all forms of entertainment really. It is always interesting when getting involved in certain things with film and television. With television sometimes it could be either a one or two camera shoot or a live audience…and those are two completely different things. I have done television in front of a live audience and then I did a film like “Inkubus”, which is a horror film. So it is very interesting to being able to work in both mediums. Then following that I did another film called “Mancation”, it is a mix of “Old School” and “The Hangover”. So I enjoy it all but it is definitely different.

MG: Do you get the same kind of thrill when you perform in film then when you were on stage?
JF: I think it is kind of different. With film, you get to see the final product, when it is edited and done. When you are doing a concert, you get an immediate response, you are performing right there…especially when you are on Broadway. There are sometimes when you do things on film and you think it is funny as hell or visa versa, you do not think it is that funny but people think it is funny as hell. An example is “My Big Fat Greek Wedding”, I said “Hey you, We’re gonna kill ya”, people laugh but I do not think it is that funny. It is very interesting. When shooting that kind of stuff, that line I shot probably ten or twelve different ways as far as saying it and delivering it. I guess it was so natural and nonchalant that it came out funny.

MG: Tell us about your new film “Inkubus”?
JF: It was awesome and intense. I had never done a horror film before and to get into that kind of realm was great. To get to work with Robert Englund and William Forsythe, they have done a lot of films in general, and to figure out how to create the timing to feed off them was very cool. I honestly learned a lot from just watching them. Robert is all about film. He loves the old school Hollywood and he has all this great knowledge.

MG: Tell us about your role in the film?
JF: I play Detective Tom Caretti. The story takes place with our office moving to a new precinct. There are a few cops stuck in the old one, still transferring everything over. A kid comes in arrested claiming he cut off his girlfriends head. That is where the mayhem starts. Robert who plays Inkubus comes in with the girls head that this kid supposedly cut off and said he did it. All this havoc just happens. I play this Detective looking to become a Lieutenant when I move over to the new precinct. Inkubus is the kind of guy that kind of mind fucks everyone. It is an exciting film. The director, Glenn Ciano, is a good friend of mine. He wrote “Homie Spumoni”, which I did with Donald Faison and Whoopi Goldberg. Having a relationship with him and relaying my ideas to him was great.  I was able to watch the film through its editing process, which is something not a lot of actors get to see. It was pretty cool.

MG: How did you get involved with “Imagination Movers in Concert”?
JF: [laughs] Basically they just called me up. I never met the guys before but my nephew was a huge fan of the show. I have done some work on Disney Channel before and they said that they wanted to me to be apart of the show. I figured what the heck and said “Let’s have fun with it”. It was really interesting experience. These guys have this great over the top energy and it is so infectious you can’t help it. Kids really see that and really respond to it. It was fun. Doug (Fisher) from “Ace of Cakes” also did one and we met while filming briefly. After I did the show, I got a call that they were doing 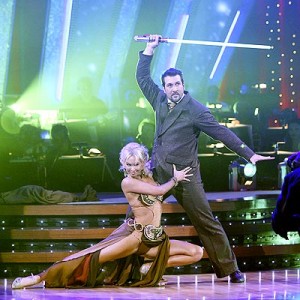 this live concert. I thought it would be cool and Doug was doing it as well. With all the people they have worked with it is cool that they choose us for the live concert. It was really fun.

MG: Tell us about your experience on “Dancing with the Stars”?
JF: It was interesting, I got asked to do it the very first season and I turned it down. They asked me again the second season and I turned it down. Again for the third season and I turned it down. I knew it had legs and popularity to it and I started to think how could I benefit from this. I waited and soon I realized that 22+ million viewers watch the show and there has to be something there. I thought then it might be worth a shot. When they asked me to give them songs to submit, I was told I could give them as many as I wanted…so I gave them about 170 songs. They then told me the average was usually 10-20 songs. It was random stuff that nobody would ever use. I started pulling off soundtracks…”Superman”, “Star Wars” and “Willy Wonka”. It was cool because a lot of the songs I chose did get cleared and I did do the songs like the “Star Wars” Tango, most people remember that one the most. You got all these people that never watched “Dancing with the Stars” and they started watching cause of “Star Wars”. It was a lot of fun. It then branched off to me doing other things. People got a chance to see my personality. I guess they knew I was in a band with five other guys but never saw my personality come to life. What you see is what you get. It was just something I had never done and just took a crack at it.

MG: Am I allowed to bring up your character Joey Vitolo in “Hannah Montana”…”Try the Veal!?”
JF: [laughs] It is very interesting how the conversation came up. I was doing “Dancing with the Stars” with Billy Ray Cyrus on my season. He was in the middle of doing “Dancing with the Stars” when he started back with “Hannah Montana”. I told him that my daughter loved the show and he told me he wants to come on the show. I told him to let me know and I would do it and like not even two weeks later I got a phone call. So I went it and shot it, it was pretty interesting.

MG: Do you find that you do work that your kids would enjoy?
JF: I like to do shows like that for them, yeah. You see a lot of people like Eddie Murphy who was doing all these dirty movies…he has kids and then he does “Dr. Dolittle”. It does open your eyes to a totally different realm and you find yourself wanting to do some film and stuff for your kids and watch it as well. It was fun. My first daughter, Brianna, she has seen stuff I did with *NSYNC and she was like “Ok, whatever”, but they I did “Hannah Montana” and then I was a superstar [laughs]. Now I am famous.

MG: Tell us about your latest hosting gig on ABC, “Karaoke Battle USA”?
JF: It will star airing on August 12th. It is a prime time ABC show. Karaoke has obviously been going on for many years and each year they have a World Championship competition, this year it will be in Killarney, Ireland. What ABC did is a documentary on the karaoke world. They basically did a contest trying to find the karaoke king and queen. Once chosen, they will be representing the U.S.A. in Killarney, Ireland. They will also both get a recording contract as well. So it has been really fun. We traveled around from Houston, Las Vegas, New York and Chicago. So starting the first week of August we will be in Los Angeles.