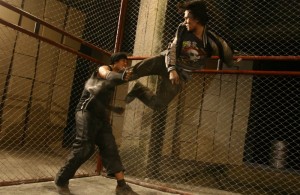 Right off the bat since this film is directed by Panna Rittikrai (“Ong Bak” Series & “Born To Fight”), it immediately has my attention. Unfortunately once they try and introduce a ridiculous plot into this film, they lost my attention. I understand that in these films you are really only suppose to focus on the fighting but I had a hard time with the terrible sub-plot. The film definitely contains some amazing death-defying action and a huge range of martial arts techniques from Muay Thai to Kung Fu to Tai Chi. Fans of martial arts film and specifically the “Ong Bak” series, check this out but only for the fighting and not the story.

The story focuses on a group of friends who are in a fight club who are trying out for a TV show but it turns out to be a life or death game. The game is that people are bidding against them to win or lose and they are left fighting for their life. They must join forces and fight for their lives and also rescue their kidnapped friend in the process. Of course there is twists and turns but overall all you really need to care about is the fight scenes. The sub-plot is so cheesy and laughable that I had a hard time focusing on the action.

The Blu-Ray presentation is one of the best parts of the disc. The picture is crisp and clear. The sound is bone-breathtakingly good. I mean you literally hear the fighting like it is in your living room. The extras are lacking a bit but include “The Making of BKO: Bangkok Knockout” and “Behind the Scenes”. These two features are essential for an action film because you get to see how they did all these amazing stunts and fights scenes. Also included is a trailer to the film. Overall worth at least one watch but repeat value is just not there.