Jonathan Sadowski is the star of CBS’ new hit comedy “$#*! My Dad Says”. The show is definitely one of my favorite shows on TV and since the shows pilot it has only seems to better and better with each episode. Movie Mikes had a chance to chat with Jonathan about working on the show and what it is like to be playing William Shatner’s son.

Mike Gencarelli: Tell us how you got the role of Henry in “$#*! My Dad Says”?
Jonathan Sadowski: So back in February, I auditioned for the role. I was suppose to screen test for it but Larry Charles had this unscripted sitcom and he offered me a role. I ended up working with Larry for this pilot. That show ended up not being picked up and they wanted to recast the role in “$#*! My Dad Says”. So like two months went by and I will never forget it was a Friday, Max (Mutchnick) and David (Kohan) wanted to meet me on that Monday. So I went in on Monday…Tuesday I did a screen test for Warner Bros…Wednesday I did a screen test for CBS…and Thursday I got the call that I got the role.

MG: What did you originally think about the show since it was based on a Twitter feed?
JS: I never had a Twitter account or anything like that. But I had a lot of friends who were big fans of that Twitter feed. Everyone once in a while, they would send me one and of course, I thought it was hysterical. I think it is something that everyone can relate to. Everyone has one of those family members that says things that are a little off color or make you just want to bury you head in a hole. I

think it is cool that network television was the first to explore that.

MG: How has it been having Willam Shatner play your dad in the show?
JS: He is awesome. He is a lovely man. We talk about life and love. We have breakfast together. I even watched the Super Bowl at his house and like Monday Night Football. He is just fantastic. He is a totally pro. It is like winning the lottery being able to work with someone like that everyday. The guy is like a TV icon, he has been acting longer than I have been alive. It is just amazing. It is the best apprenticeship ever getting to follow around someone like that all day on set.

MG: Everyone on the show seems very close on the show, have you all formed good friendships?
JS: On Tuesday, we taped our season finale and everyone was bummed. Like really really bummed. At the end we were all sitting around and me, Nicole, Will and Bill all kind of gave each other a big hug. We were thinking who knows it could be the last day ever for our show. It was really emotional. So yes definitely. 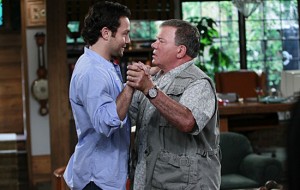 MG: What has been your favorite episode to date?
JS: I would have to the pilot episode is the most memorable. Having my family in the audience for the first taping and knowing the show was going to be on the air. It was cool for me because I was the new one in the show and the show was about that too. I was the new one coming up to this family I haven’t seen in years. So it was very true in that sense, plus I got to slow dance with William Shatner. In those moments when we were shooting those scenes, I keep thinking “ask me a year ago about what I would be doing”. I never taught I thought when I moved to LA, I would be slow dancing and playing William Shatner’s son in a show for CBS. I would have never guessed that.