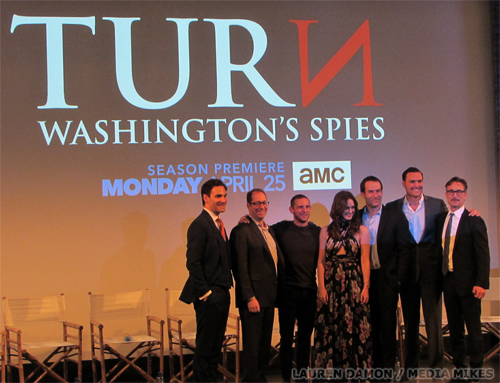 Haven’t you heard? American history is so hot right now, you guys. Between Hamilton dominating Broadway and our electoral cycle being, for better or worse, completely unprecedented, now’s as good a time as any to look back to where it all began. “Turn: Washington’s Spies” returns Mondays on AMC for its third season so you may do exactly that. “Turn,” based on a book by Alexander Rose, follows the Culper Ring, an unlikely batch of spies from Long Island who helped George Washington turn the tide of the American Revolution. After two strong seasons—which, for you binge-watchers out there, are both currently streaming on Netflix!—the third looks to be the most exciting yet. There will be the addition of their own Hamilton and more importantly, the infamous defection of Benedict Arnold.

Originally an American war hero for his decisive actions at the Battle of Saratoga, an injured Arnold was passed over for promotions he believed were his due and eventually his bitterness swayed him into the service of the British. On the show, Arnold is played with humanity by Welsh actor Owain Yeoman as part of a love triangle that involves romantic rival, and British spymaster, John Andre (JJ Feild) and beautiful loyalist Peggy Shippen (Ksenia Solo). Yeoman was part of a premiere screening panel last week at the New York Historical Society where I talked to him about today’s politics and the exciting times to come for his role on the show.

Lauren Damon: When you’re working on a show like this and at the same time watching this year’s election, does it have a greater impact on you?

Owain Yeoman: It’s very interesting I think, the parallels between—and I think it’s something that the show is consciously trying to market this year, is the, you know the parallels between the Red states and the Blue states and how things, depressingly, probably haven’t changed for a few hundred years. You know, we’ve still got the same old gripes and the same old battles. I think it’s very smart of AMC also to kind of market a you know, “WWGWD?”—What Would George Washington Do?—type campaign… And it’s true, he’s the father of our nation, of this nation, not necessarily my nation! [laughs] But you know the nation that I’ve come to call home. And I think it’s incredible how the show really does speak to the current political climate. And we couldn’t be more in the sort of fervor of it all with [the New York primary vote] going on here last night. So I think that’s our hope, that people really see that though hundreds of years have gone by, the themes and relationships and political climate is definitely still the same.

LD: This season is really your season, getting into Benedict’s treachery, is that exciting for you?

OY: Very exciting! Yeah, I mean like I’m finally becoming the traitor I always hoped I’d be! [laughs] It’s kind of a dubious prospect. He’s one of the those characters who when you tell people who you’re playing, they’re like ‘Oh you’re playing That Guy, I’m sorry’ but it’s a great challenge. I love discovering a more human side to him because I think you know he’s known very one-sidedly as America’s biggest traitor and there’s so much more to him. He was a great hero, the hero of Saratoga, and he was a real person. And I think if you approach something in that black and white area and don’t have the gray area that is real life, it doesn’t do someone justice. So that’s what we’re concerned about, showing the journey that gets him to be that guy.

LD: Yes in grade school history he was definitely The Bad Guy.

OY: Yeah, it’s like ‘Ooooh it’s Benedict Arnold!’ Yeah and I think you know that it’s important to understand that he was one of America’s greatest generals before he became the famous traitor. And I think you only get a sense of the drama and the tragedy of that turn if you establish him as the general that he was before that fall. So you know hopefully people can get invested in that, and people can be you know, sort of see a different side to the character than maybe grade school taught us about, you know?

LD: As on the show, is there on-set any rivalry between you and JJ Feild?

OY: Oh always! [laughs] Yeah, I mean we’ve got a fierce love triangle that really comes to a head—no pun intended you know ’cause someone loses theirs at some point [laughs], history’s the ultimate spoiler for this show so I don’t feel bad about saying that. But yeah, it’s one of those things where you know, the stakes are high. In love, in the political climate, international climate. And this show—this season is the season [creator Craig Silverstein] said he always wanted to make. So all the big stuff’s happening this year, it is the Don’t-Miss Season.