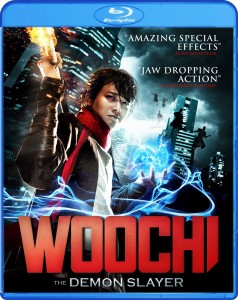 Right from the minute when “Woochi” starts it really grabs you in with amazing visual effects and CG work.  Right after that it really starts to unravel…and unravel.  The film was made back in 2009 and this was the first time it is being released on Blu-ray. The film is also 2 hours of 15 minutes, which is way too long, though it is labeled as being only an hour and 55 minutes. So I assume that Shout! Factory missed that for the packaging. I found myself looking to fast forward numerous times throughout this film. The action scenes are decent when they actually occur but not frequently enough. I would put a giant pass on this film for sure or just watch the trailer and all the good stuff is right in there.

Official Premise: This fantasy-action blockbuster based on a Korean folktale broke all box-office records in Korea in 2009. Jeon Woo-chi, an undisciplined, womanizing wizard unjustly accused of the death of his master, is trapped inside an ancient scroll until he is set free in 2009 by the wizards that imprisoned him to help fight against evil goblins that have taken over present-day Korea. The only problem is that Woo-chi is more interested in his new modern home – and the women of Korea – than becoming a hero. Will he be the savior of mankind?

The Blu-ray presentation is well delivered by Shout! Factory. The 1080p transfer looks clear with the CGI work, even though that effects themselves looked decent at best. There are multiple audio tracks including a Korean and English DTS Master Audio 5.1 tracks, as well as Korean and English DTS-HD Master Audio 2.0 tracks. The only way to watch this film is in Korean, since the English track is completely unbearable. The special features included are impressive, even though the film isn’t. First off is a Making-of Featurette, which runs about an hour. If that isn’t enough there are four Production Featurettes focusing on “The Magic of Computer Graphics”. There are also some deleted scenes and trailers included.