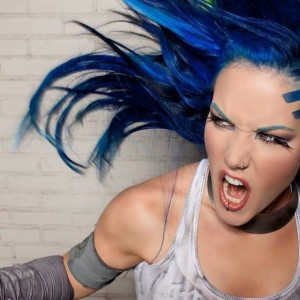 Alissa White-Gluz is the lead singer for the heavy metal group Arch Enemy. Alissa stepped up to the microphone after long time lead vocalist Angela Gossow chose to retire from performing earlier this year. The band has just released their 9th studio album and first featuring Alissa titled “War Eternal”. Media Mikes spoke with Alissa about how she came to join the band, what it was like working on the new record and the bands current tour plans.

Adam Lawton: Can you give us some info on how you came to join the band?
Alissa White-Gluz: I had been working in the metal scene for about 10 years. I had created a bunch of bands myself and I also sang along other bands such as Kamelot. I was friends with Angela Gossow for years and at some point last year she and Michael Ammott contacted me with news that Angela wanted to retire from singing and take over the role as manager for the group. They then asked if I would be interesting in filling that spot as the wanted to continue the band. This was a huge shock to me but also a great honor. I was very excited for the opportunity because I was familiar with Arch Enemy and a fan of their music. We had such great chemistry from the first time we worked together.

AL: Was there any hesitation on your part to join the group knowing that Angela was still going to be involved?
AWG: I spoke with Angela right away about this and she told me that this was her decision to step down from the band as the singer and that she now only wanted to manage the band. She wanted me to know that I was free to do my thing and that there would be no ego’s involved.

AL: What were the recording sessions like for the new album?
AWG: The band had already started working on instrumental tracks. They sent those over to me to put vocals on and I was just blown away. The songs were just so good. They were 100% Arch Enemy but with a twist. When we got together to work on more songs we realized we had quite a big range of styles. I brought a new background of influences. I worked very closely with Michael and we each wrote about 5 songs. It was a crazy time as we all had huge changes going on in our lives. The album was a very cathartic experience.

AL: The band has already released two video for songs off the new album. Are there plans to release anymore?
AWG: We have a whole arsenal of stuff that has yet to be released. We are very prepared as we didn’t want to just tell the world that I was the new singer. We wanted to inform our fans as to what was going on and what they could be expecting from the new album. We had a really crazy tour schedule lined up and we wanted to have everything set before we started that. There’s a lot of great stuff to be watching for.

AL: The album is going to be available with a number of bonus options. Can you tell us about some of those packages?
AWG: All the packages look really great! Fans will be able to get everything from the arm band that we wear on stage to a special necklace that coincides with the album. There is a really beautifully printed art book that comes with the vinyl version of the album. We also are including with some of the versions bonus discs that include what we are calling “Shades of War” which are the demos I recorded for the album. There is also a guitar notation disc that Michael and Nick put together which is really cool as well. There are just so many different things fans can get by pre-ordering the album.

AL: Can you tell us about your current tour plans?
AWG: We are basically touring non-stop until next year. We are overseas right now then I have two weeks off then we leave for the U.S. with Kreator. We also will be doing some festival sows here and there as well so our tour schedule is just insane.

AL: How has the fan reception been since you started performing live with the band?
AWG: It’s been fantastic.  I totally can understand skepticism when a band changes its singer. I have seen it happen myself where a group changes singers and it didn’t really work out. I feel that if the group makes solid music and the group works well together then nothing can take away from that. If the music is good then it’s good no matter what but it has to be done the right way. I think in our case things worked out really well. We were very aware of things that could happen and we paid extra close attention to ensure everything went the way we wanted. Fans have been chanting my name which is just been really great!