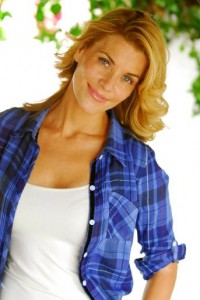 McKenzie Westmore is the beautiful host of Syfy’s hit show “Face Off”.  She grew up in the field since her father is Michael Westmore who has been in the make-up special effects business for many years.  This makes McKenzie perfect to host the show since she has some great experience in the make-up special effects field.  McKenzie is also well known for her role in the soap opera “Passions”.  Movie Mikes had a chance to chat with McKenzie about working on “Face Off” and well as in the business.

Mike Gencarelli: How did you come to host Syfy’s hit show “Face Off”?
McKenzie Westmore: Some people may or may not know but my father is Michael Westmore who has won multiple Emmys, an Oscar, he has star on the walk of fame and so on. My family has a real rich history in the make-up world starting with my great grandfather which kind of revolves around “Face Off”. When I was a kid I was always in the lab with my dad working on various projects and learning all the ins and outs of the industry. I decided that I wanted to move more towards acting and being in front of the camera. However I still have that love and respect for the behind the scenes work. When “Face off” came along I never really saw myself doing reality television but it was such a perfect tie in that for me if I was going to host anything it would be this type of show. There are certain hosts out there that really don’t make sense on the shows they host but on “Face Off” all the pieces fit perfectly and I just couldn’t say no.

MG: Since you have always been exposed to special makeup effects, was it like second nature to you watching the contestants work?
MW: When I first walked into the lab of “Face Off” all the smells of the chemicals reminded me of home and it really brought me back to when I was a kid on the set of “Star Trek” or wherever my dad was working. For a long time my dad’s lab was attached to our house so I could go in there and see all these great creations my dad had done and that I was part of. The show really was second nature. I am definitely not on the level as our judges but I could give a certain perspective since I grew up in this industry and saw things firsthand.

MG: What would you say was the most rewarding part of working on the show?
MW: I would have to say that all the guys at mission control were really great and a pleasure to work for. They really made my job easy and it was fun to go into work every day. On the creative side it was really great to see what the artists could turn out within a couple hours. Even from my dad’s perspective some of the things were almost impossible. It was a pleasure and joy to see the creations come to life.

MG: They are currently auditioning for season two; do you have a process with that?
MW: No, I do not. I think there might be some things coming up but I don’t want to give away too much. I think casting is winding down as we are starting shooting in the Fall.

MG: What can we expect from the show in season two?
MW: I really don’t know anything right now as everything is kept under lock and key. I do know that it’s going to be twice the creativity and the challenges will be a little harder. Some challenges will remain the same for however long we do the show but, I think the ante will be upped this season. We are also adding two episodes which in turn adds more contestants.

MG: Having worked on soap operas for nearly 10 years, tell us about your experience on those shows?
MW: I have an appreciation for reality television but soap operas really aren’t too far off from that. Both are go, go, go type of shooting and the hours can be very long. It was a bit different though with soap operas because you’re playing a scripted character that needs to have a motivation. With the reality series it’s just me giving challenges praying to God that I give the instructions correctly. It was a lot of fun getting to experience reality television hosting and I look forward to doing more.

MG: You father, Michael Westmore, worked on “Star Trek” franchise, how was it getting to work with him on projects from “Insurrection” to “Voyager” to “The Next Generation”?
MW: It was amazing! When he was working in the lab I was always helping him out there. I remember he was sculpting an alien and there was clay everywhere. I came along and started sticking pieces of clay around the ears and on the neck and my dad really liked it and left them in. I think it was a Cardesian that he was working on. As an actor, the different times I got to be on “Star Trek” were fantastic from being a kid on “Star Trek: Next Generation” then being 20 years old doing “Star Trek: Voyager” was amazing.  “Star Trek: Voyager” was really fun because it was a guest starring role that had the potential of becoming a regular character that was going to be the love interest for Ensign Kim. However the offer for “Passions” had come along and I was only given a maybe from “Star Trek” and “Passions” was offering me a 3 year contract.

MG: Tell us about your upcoming films “Dose of Reality” & “Vile”?
MW: Those are two totally different films. For some reason lately I keep being cast as the puppet master [Laughs]. We just finished shooting  “Dose of Reality” the other day. We did all outdoor night shoots on that project from about 6pm till 6am. Fairuza Baulk stars in the film and she has been someone I have been dreaming of working with since I saw her in “The Craft”. It’s a well done script and is one of those drama/thriller type films. I think once it hits the festival circuit people are going to want to see it a couple times. The twist in the end just blew my mind. I actually had to re-read the script because I thought I had missed something. It’s a fantastic mind bender. “Vile” is about a car full of college kids on their way home from a weekend getaway. My character is in need of help and approaches the kids. After being helped I gas the entire car and take the kids to a house where they are held hostage. In order for them to get free they must torture each other which releases chemicals into a vile inserted in to each of their necks. Once the vile is full they are released. It’s a pretty amazing story line.