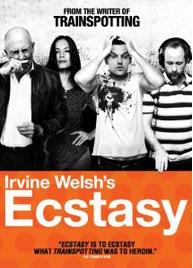 I remember when I saw “Trainspotting” for the first time back in 1996. I had never seen anything like it. I couldn’t understand a damn thing they were saying but I freaking loved it. After that I also became interested in Irvine Welsh’s books. The next film adaption we got was in 1998 with “The Acid House”, good but not even close to “Trainspotting”. So its been 14 years since the last adaptation and we get “Irvine Welsh’s Ecstasy”. Again not even close as good as “Trainspotting” but not terrible either. If nothing else this film easily kept my attention for the hour and 45 minutes. It doesn’t have the edge that I was really hoping. Overall, I would call this a one-timer.

From the mind of Irvine Welsh (Trainspotting) comes a pulse-pounding thriller set against the backdrop of Scotland’s drug-fueled dance scene. When free-spirited Lloyd gets in deep with the local kingpin after a drug deal gone bad, he decides to cut ties and kick old habits for the woman he loves. But when his old business partners come around looking to settle the score, Lloyd must do whatever it takes to keep her safe, even if that means getting back in the game and risking it all to get even.

“Irvine Welsh’s Ecstasy” packs a great cast including Adam Sinclair (“To End All Wars”), Kristin Kreuk (“Smallville”), and Billy Boyd (“The Lord of the Rings”).  They all deliver great performances throughout.  The film features some great music form Paul Oakenfold, Coldplay and DJ Tiesto.  New Video only released this film on DVD and I feel that Blu-ray could have severed this film much better in terms of presentation.  Top that with that fact that there are zero special features included on this release. I will keep holding my breath for Danny Boyle to finally make “Porno”, the follow up to “Trainspotting”.