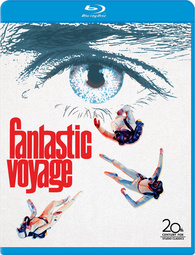 If you like science-fiction then you should know and love “Fantastic Voyage” released back in 1966. The film is the original psychedelic inner-space adventure. It delivered a great cast including Stephen Boyd, Donald Pleasence and Raquel Welch in her feature-film debut. The film also was awarded an Oscar for Best Visual Effects, which is definitely deserved. The director Richard Fleischer was also known for his amazing 1954 Disney classic “20,000 Leagues Under the Sea”. The film is a classic and only gets better with age, top that with a very impressive Blu-ray presentation and you have a winner here for sure!

The adventure of a lifetime occurs not in the outer reaches of space, but inside the human body. An elite team of medical and scientific specialists race to save a top government scientist who is suffering from a blood clot on the brain. Their mission: be reduced along with their submarine-like craft to microscopic size, enter the bloodstream of the ailing scientist, and journey to the brain to perform an emergency procedure. With only sixty minutes to complete their mission, the scientist find themselves fighting off an attack by white corpuscles, caught in a tornado-like storm in the lungs, and struggling to survive sabotage from one of their own.

Fox delivered a very impressive Blu-ray presentation. The film won the Oscar for Best Visual Effects like I said and they look stunning with this 1080p transfer. For a film nearly 50 years old, the transfer gives it a really nice face life. There are two audio tracks for this Blu-ray including an DTS-HD Master Audio 5.1 and DTS-HD Master Audio Mono. I liked the surround mix but I have to admit the mono really took it home for me personally. I felt that the 5.1 track delivered the sound well but for this film the original mono sound did it better.

The special features are quite impressive as well for the 1966 classic. There is a great commentary track from Film & Music Historian Jeff Bond. There is an Isolated Score Track with commentary by Film & Music Historians Jeff Bond, Jon Burlingame and Nick Redman. Not really a full isoalted track due to the commentary but still awesome. There is a featurette called “Lava Lamps & Celluloid: A Tribute to the Visual Effects of Fantastic Voyage”, a must see for fans of the film. There is a cool “Storyboard-to-Scene Comparison” for the Whirlpool Scene. Lastly there is the Original Theatrical Trailer included. 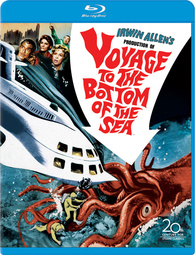 When it comes to science-fiction films from the 50/60’s, I have a certain weak spot. “Voyage to the Bottom of the Sea” (1961) is a production from Irwin Allen, who wrote and directed the film. It packs a super great cast including Joan Fontaine, Barbara Eden, Peter Lore, and Frankie Avalon. Frankie also sings the theme song as well aptly titled “Voyage to the Bottom of the Sea”. The film used miniature models for the submarine shots as well as 10 and 18 foot subs for other shots. The film is fun and although doesn’t hold up as much as I am sure it did, it is still given a glorious Blu-ray presentation and is worth checking out.

Office Premise: A routine scientific expedition to the North Pole turns into a race to save all mankind when a radiation belt in space causes a fiery inferno on Earth. Admiral Nelson (Walter Pidgeon) and the crew of the atomic submarine Seaview battle saboteurs, giant sea-creatures and attacks by enemy submarines as they race to prevent global catastrophe. Renowned disaster film producer, Irwin Allen, produces and directs an all-star cast including Joan Fontaine, Barbara Eden, Peter Lore, and Frankie Avalon. The stunning visual effects and breathtaking underwater photography make this one of the most respected sci-fi adventure classics of all time.

Fox delivered an impressive Blu-ray presented for a film over 50 years old, you could have fooled me. The colors are crisp and the 1080p presentation makes this film look brand new. The audio track included is a DTS-HD Master Audio 4.0 track, which is a little unusual but nonetheless sounds amazing. In terms of special features, “Voyage to the Bottom of the Sea” delivers. There is a interesting commentary track by Author Tim Colliver. There is a documentary called “Science Fiction: Fantasy to Reality”. There is an awesome interview with with Barbara Eden. I love the film’s score, so I am pleased to announce an Isolated Score Track. Lastly there is the Original Theatrical Trailer.