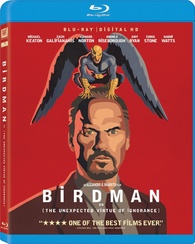 “Birdman” was easily one of my favorite films of 2015. Michael Keaton gave the performance of a lifetime. I am writing this review after the giant snug from the Academy denying Keaton the Best Actor award. This was a huge mistake because this was finally Keaton’s time. He really gave his all to this role and was not great but mesmerizing. What I loved about this film was that besides the performances, I loved the way it was shot with long and in what seems like unedited takes. This was a very unique and smart film. It may not be for everyone but it is certainly quite amazing.

Official Premise: “Birdman: Or (The Unexpected Virtue of Ignorance)” is a black comedy that tells the story of an actor (Michael Keaton) – famous for portraying an iconic superhero – as he struggles to mount a Broadway play. In the days leading up to opening night, he battles his ego and attempts to recover his family, his career, and himself.

Fox is releasing this as a combo pack with a Blu-ray and digital HD copy included. The 1080p transfer looks fantastic. Even though the film has that sort of handheld feel to it, it looks outstanding nonetheless. Cinematographer Emmanuel Lubezki, who not only won the Oscar for “Gravity”, also just won for “Birdman” last week, really nails the shots in this film. As for the DTS-HD Master Audio 5.1, it works with the dialogue really well. I am still not 100% sold on Antonio Sanchez’s score. Random drumming doesn’t really work for me as an effective score.

The special features are decent but a bit of a letdown to be honest. I was really hoping for a jam-packed commentary track to discuss the deeper aspects of this film but no luck. There is a solid feature called “Birdman: All Access” which runs over 30 minutes and has some great behind the scenes footage. There is also a fun feature called “A Conversation with Michael Keaton and Alejandro G. Iñárritu”. Lastly there is a quick photo gallery included called Chivo’s On Set Photography.

I feel like thousands of future theses will be written about “Birdman”. It’s a movie that definitely necessitates multiple viewings because of how much is stuffed into its nearly two hour run time. Besides being a contemplative piece of filmmaking, it’s a true joy to watch something so self-conscious and fully aware of what it’s doing. “Birdman” is not the latest box office juggernaut, but more like a powerful awards force.

Could there have been a better choice than Michael Keaton? He plays Riggan, an aged actor living off the memories of being the lead in the powerful superhero franchise, Birdman. He’s nearing the end of his life and reaching the last remains dollars of his checking account. The only thing he can do to recoup his financial, mental and acting losses, is directing, writing and starring in a play adaptation of “What We Talk About When We Talk About Love”. Keaton puts on the acting performance of his life by portraying Riggan, the man who hopes to put on the acting performance of his life. Do I even have to mention Keaton was the original movie Batman? Seriously, how meta can you get?

I’m barely clawing at the surface and that’s just by pointing out the most obvious symbol in this movie that’s full of literary devices. Working with Riggan on his comeback performance is one of the best method actors in the land, Mike (Norton). Mike is a philosophical mess who confuses his on-stage performances with his own personality. He’s able to dish out some harsh truths, but when it comes to his own personal life, he finds more relief and comfort in the people he portrays. Leading to a lot of moments where he’d much rather face an audience than face the music.

Along for the ride as well is Sam (Stone), Riggan’s daughter, a recovering addict that has a gloomy look at life and covers her emotional wounds with teenage sarcasm and put downs. She’s kind of like a personal assistant to Riggan although she spends most of her time reflecting and being mopey. Starring in the production itself is Lesley (Watts), who’s constantly saying the wrong thing and half the time on the verge of crying. She’s aspiring towards Broadway infamy. Laura (Andrea Riseborough) is Riggan’s girlfriend who’s not utilized as well as she should be considering she’s a psychotically clingy.

Then there’s Keaton…again…the voice inside Riggan’s head. It’s his Birdman persona constantly reminding him that he’s wasting his time, and needs to strap on the leather suit again and take flight. He gives Riggan an added layer of mystery and throws in some more commentary to the happenings around him and gives the audience a little jab about why we, the movie goer, are even in the theater watching this movie to begin with.

Everyone is outstanding in this. Even Zach Galifianakis gets to stretch out his acting legs. Keaton has been in a lot of movies, but it’s hard to think of one where he’s this amazing. His scenes with Edward Norton are some of the best in the movie and while I personally hold Norton in high regard in terms of acting, Keaton blows him out of the water. I’m hoping Keaton has more performances like this left in his tank.

The direction by Iñárritu is imaginative and genius. The entire movie is put together as one long tracking shot, giving it an on-stage production feel. Obviously there are some clever editing tricks to make this long shot effect real, but when you have characters talking at great lengths as the cameras spins around the room and follow them down the narrow halls of the theatre, it’s quite astounding to experience. Iñárritu employs a jazzy bass and drum soundtrack to match the tension of our characters and by the end starts mixing in some classical tones when it’s time to get a little more abstract.

“Birdman” is a movie that indie and Oscar voters are sure to remember come award season. It’s definitely not a movie for everyone as many, including the gentleman in front of me, were yawning or rotating their neck to prevent stiffness. Some of its more grand ideas may be lost and some of the rapid fire dialogue might not come across as witty without your full and undivided attention. So please, experience “Birdman” undistracted and bask in one of the cleverest movies of the year.