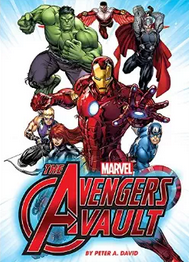 For those wanting to brush up on all things Avengers prior to the release of “Avengers: Age of Ultron” the lasts release from author Peter A. David and Thunder Bay Press should do the trick. “Marvel” The Avengers Vault” is a 176 page hardcover release that is as the title suggests a vault of information related to each of the core Marvel Avengers. The book is broken down by chapter with each chapter being dedicated to one of 4 characters Iron Man, Thor, Captain America and The Incredible Hulk. Each page of the book features beautiful full color art work printed on high quality paper. Another plus, the book is laid out very much like a comic book as each chapter delves deep in to the characters origins. If that alone isn’t enough separating each chapter are numerous envelope pages which include some really cool collectibles such as Iron Man concept art, (reproduction) Jack Kirby art and Captain America’s Sentinels of Liberty membership card to name just a few of these great extras.

Though the book appears to be aimed at hardcore Avenger collectors I found it to be very accessible and fun for all ages. Even if you skip the text readers can enjoy all of the really great art work from the four characters comic history all in one place. To close out the book readers are a treated to a glimpse of other upcoming Marvel heroes (Ant Man, Captain Marvel and Black Panther) who will be making their way to the film screen very shortly. Author Peter A. David really hit a home run with this book so if you are looking for something that can hold you over until the May release of “Age of Ultron” this book will certainly do the trick. 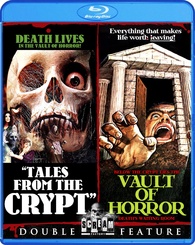 “Tales From the Crypt” comics are one of the main reasons, I got into horror films when I was a kid. This 1972 adaption from the comics directed by Freddie Francis (The Creeping Flesh) was a great collection of horror films on film. It boasted a great cast including Joan Collins (Empire Of The Ants), Peter Cushing (Horror Of Dracula), Patrick Magee (A Clockwork Orange) and Sir Ralph Richardson (Rollerball). I remember the first time I saw this film by accident honestly since I thought it was a release from the HBO series and I am so glad that I did. Still holds up today for sure!

“Tales From The Crypt” Official Premise: When five unwary travelers with dark hearts stumble into a series of catacombs, they find themselves in a cavern with no way out. But the horror’s only just begun as a mysterious figure appears to reveal to each person the shocking events that will lead to their well-deserved, untimely (and unavoidable) demise. Tales From The Crypt is the original, gets-right-under-your-skin creepfest!

“Vault Of Horror” is a solid follow-up to “Tales From The Crypt” and is real draw in this release because it is available uncut for the first time on home video! It also packs a solid cast including Tom Baker (Doctor Who), Denholm Elliott (Raiders Of The Lost Ark), Curt Jurgens (The Mephisto Waltz) and Michael Craig (Mysterious Island). Like “Creepshow 2” was the “Creepshow”, it doesn’t top the first but this is a another great collection of classic horror stories, even though a little more cookie cutter.

“Vault Of Horror” Official Premise: Five unsuspecting hotel guests step into an elevator, which leads them into an underground vault. Trapped with no way out, each guest shares a gruesome tale of an encounter with death. But as the stories unfold, the men begin to suspect that their presence in the vault is no coincidence, and that the only way out…is death.

Scream Factory is behind this double feature release and it is a must for any horror fan that loves anthology films. Two great 70’s British horror films for the price of one. The 1080p transfers on both films are good. They are not outstanding but for the age of these films, the fact that they haven’t been fully restored, they look good. Same goes for the DTS-HD Master Audio Mono tracks, which work well with the films scores. There are no special features included either but if you consider “Vault of Horror” as a bonus film, they are in good shape.

When this book says that it is the definitive story of the making of “Alien”, they were not exaggerating.  This book is extremely thorough and very descriptive. It also comes in a very impressive slipcase, which adds a lot of class to this already perfect homage to the film. Each page are packed with photos, artwork and even Ridley Scott’s own storyboards. There are  also ten reproduced artifacts enclosed in envelopes throughout the book. This brings a whole new aspect to the book.

“Alien Vault: The Definitive Story of the Making of the Film” covers from the making of the film to its road to becoming a cult phenomenon.  It is illustrated beautifully and looks very high quality, especially in the photos.  The interviews and stories included are extremely interesting and there is also great insight into filmmaking including the some of the camera tricks used on the production. The general flow of the book also work really well and keeps the book a real page-turner.

I think it is really great that we get to check out not only Ridley Scott’s own annotated storyboards but also polaroids from the shoot and also script pages.  Of course no “Alien”  book is complete with out some concept artwork of the crazy brain of H.R. Giger.  There is also some really cool sketches and construction blueprints for the the crew’s ship, Nostromo and also costume designs by Moebius. If you are a fan of behind the scenes photos like me, they you are going to also really enjoy a bunch of never-before-seen shots of the cast and crew.  Overall this book is a no-brainer and it will easily leave all “Alien” fans 100% satisfied. 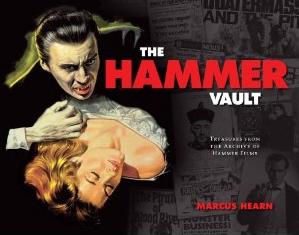 If you enjoyed Marcus Hearn’s last book “The Art of Hammer”, then you will like this one even more…as it is a great improvement.  Each page on this book is laid out SO well.  I found myself rushing to the next page just to see what was on it, so excited.  There is little to no white space on each page, since it is totally full with either props, script pages, unused poster artwork, production designs, rare promotional material or personal letters.   There are honestly hundreds of rare and previously unseen stills, which range from classics of the 1950s to the studio’s latest productions.

Some f the films covered in this book range from “The Quatermass Xperiment” to “Maniac” to “She” to recent films like “Let Me In”.  Of course it isn’t Hammer without Christopher Lee/Peter Cushing and the Dracula films, which are showcased beautifully. Also included are the “Frankenstein” series like “The Curse of Frankenstein”, “The Revenge of Frankenstein” and “The Horror of Frankenstein”.  I mean I just named some of the greats and there are still about 80 other films covered in this book….that’s right 80 more.  I found myself even learning new things about these films that I have never known

Don’t think that this book is just posters though…if you want that then pick up Hearn’s last book “The Art of Hammer”.  This includes rare letters from the film’s stars, pages from Peter Cushing and managing director Michael Carreras scrapbooks and also rare photos and posters that have never been published. The photos in the book are such high quality and looks beyond amazing.  The color is so vibrant and despite the age of the film it looks brand new.  Just a heads up though, the book is not for kids as there is a little bit of nudity included but if you are familiar with Hammer then this is nothing new. Honestly if you are a fan of horror at all this book is a MUST-BUY for sure!