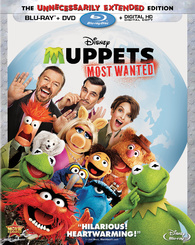 “The Muppets” was easily one of my favorite films of 2011. It may have been a little cheesy but also nostalgic and plain fun, plus the music. I mean Bret McKenzie went on to win the Oscar for the win. I still listen to the soundtrack. So now that the franchise was rebooted, I am sure everyone was dying for a sequel…well unfortunately we got “Muppets Most Wanted”, which really feels like a downgraded version of “The Muppets”. The cast doesn’t do it for me at all either. Not a Tiny Fey fan, Never watched Ty Burrell in “Modern Family” and Ricky Gervais is too good for this film. It is a fun movie don’t get me wrong. There are some good laughs and song good songs but overall it is very forgettable. I guarantee it you I will not be re-watching or singing along to the music over two years later with this one.

Official Premise: There’s plenty of fun for the whole family as Kermit the Frog, Miss Piggy, Animal and the entire Muppets gang head out on a world tour. But mayhem follows the Muppets, as they find themselves unwittingly entangled in an international crime caper. Now Kermit is behind bars at the mercy of prison warden Nadya (Tina Fey), and the World’s Number One Criminal, Constantine — a dead ringer for Kermit — has taken his place. As Constantine and his dastardly sidekick Dominic (Ricky Gervais) plot the robbery of the century, they are pursued by Sam Eagle and Interpol agent Jean Pierre Napoleon (Ty Burrell). Will Constantine get away with his nefarious scheme? Will Kermit escape in time to save the day?

“Muppets Most Wanted” is being released with an The Unnecessarily Extended Edition, which included a Blu-ray + DVD + Digital HD Ultraviolet Copy . There are two versions of the film are included: the 107-minute theatrical version and a 119-minute extended cut. The extended cut is a hit and miss, to be honest. The 1080p transfer is good just like “The Muppets”, this has a slightly bigger feel to it and benefits from that aspect. Disney is trying out a new surround track for this release, which is a 2.0Mbps, DTS-HD High Resolution 7.1 track. It is good but not amazing like I would have expect from this kind of a track. The special features are also a let down as well. There is a 10 minute gag reel titled “The Longer Longest Blooper Reel in Muppets History”. “Rizzo’s Biggest Fan” is a Rizzo complain to director James Bobin about screentime. Lastly there is a deleted Statler & Waldorf scene and a music video for “I’ll Get What You Want” by Bret McKenzie.