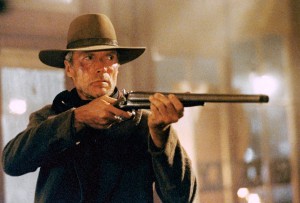 “Unforgiven” celebrates its 20th anniversary this year with a newly restored Blu-ray, releases in the Digibook format, which is one of my favorites. I feel that the Blu-ray Book, not only looks cooler than a boring case but also includes some really great information. The commemorative book contains 54 pages of great behind the scene images, script and rare photos. I recently reviewed Eastwood’s “J. Edgar” and I made a comment that I am not the biggest fan of his work, though this film an exception. It is a must purchase for fans of this movie, especially if you don’t own it.

Clint Eastwood delivers a great performance. He won an Oscar for his amazing job directing this Western, it is his best effort to date easily. I also really enjoy Gene Hackman’s role as he is one kick-ass baddie, he also won an Oscar for his role. Morgan Freeman always did a fantastic job as the loyal Ned. The Blu-ray video was definitely an improvement over 2006’s release with a cleaner 2.39:1 original transfer. The Dolby Digital 5.1 audio surround track was also impressive especially during the shoot-out scenes.

The special features includes on the release are decent but nothing new from 2006’s Blu-ray release. There is a commentary track from Eastwood’s biographer Richard Schickel, disappointing that Eastwood himself is not on this track though. There are four behind the scenes documentaries covering the making of the film. The first is called “All on Accounta Pullin’ a Trigger”, which features 2002 interviews with Eastwood, Freeman and Hackman. The second is called “Eastwood & Co.: Making Unforgiven”. “Eastwood…A Star” is the next feature is focuses on the film’s actor turned director, my least feature by far. Lastly and also my favorite is “Eastwood on Eastwood” a 108-minute documentary produced and directed by Schickel. Next up where is a classic episode “Duel at Sundown” of the Western show “Maverick” (not HD) and also a trailer is included. Decent features if you don’t own this movie already but nothing special to make you run out to buy if not.