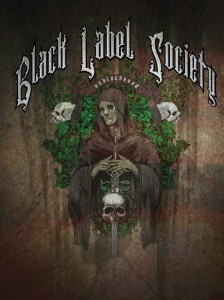 Zakk Wylde’s Black Label Society is back with a new two disc live offering titled “Unblackened”. Recorded in stunning high definition during the band’s 2013 appearance at Club Nokia in Los Angeles, CA, the two disc CD/one disc Blu-Ray album showcases the bands reworking of some of Black Label Society’s most iconic tracks in a way they have never been performed before.

Along with Zakk Wylde on guitar/piano, bassist JD DeServio, long time BLS co-guitarist Nick Catanese, drummer Chad Szeliga, singer Greg Locascio and Derek Sherinian on keyboards/piano “Unblackened” is probably the best release to come out from The Doom Crew since the early 2000’s. At first I wasn’t sure if I was going to like the lighter approach to songs that have been ingrained in to my head since I first started listening to Zakk however in my opinion this should have been the band’s sound from the start. Each track seems to breathe much better which also allows the rich instrumentation to remain clear and articulate (something that is often overshadowed by the group’s standard sludge like sound). Wylde’s voice on tracks like “Sold My Soul”, House of Doom” and “In This River” renews my faith in him as a front man as he showcases a unique vocal range that is quite a bit different than the Viking like gargling he has become known for.

Don’t let the idea of songs like “House of Doom” and “Stillborn being reworked into more acoustic renditions sway you from picking up a copy of this album as those songs along with the other 20 plus are equally crushing and still every bit Black Label Society. Though I appreciate the original recordings of each song which were reworked for “Unblackened” I can safely say that I like the new versions that much more. Another great thing about this release is that it is being released in a couple different formats some of which feature additional material and bonus tracks so no matter if you’re a devout vest wearing, chapter member of the Black Label Society or simply a music fan in general you will surely want to make some room in your collection for “Unblackened”.