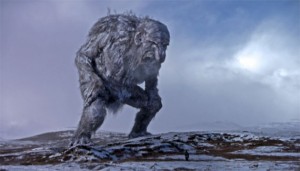 If you haven’t heard about this movie buy now just trust me and purchase this Blu-ray. It is available for only 14.99 on Amazon.com, you will not disappointed. “Trollhunter” is very unique film and takes a well used format and puts a new spin on it. I have seen this film a few times now and it seems to get better each time. It follows in the path films like “The Blair Witch Project” and “Paranormal Activity” and is filmed as found footage. It is packed with comedy, a few good scares and also great special effects. The Blu-ray comes with an English dub but I would steer clear and go with the original audio track. Overall this is a must for genre fans.

The film follows a group of students so are making a film about trolls. They meet what they believe is a troll hunter and follow him around. While they are not expecting to find anything, they are shocked with what they encounter on this trip. The film is obvious low budget but they do not make the trolls look that way. I would say this looks like a multi-million dollar project. I have watched numerous (and I mean numerous) SyFy original movies and I know low-budget SFX. The Blu-ray presentation of this film only adds to the beauty of this film. Now understand the film is meant to be shot on handheld video so it is not “Avatar” but it looks really clear. Any imperfections were purposefully done during the filming process. The sound is definitely notable especially when the trolls start…well…trolling around.

The special features are jam packed. The deleted scenes include five scenes which run about 4 minutes and include one called “Troll Hairball”, can only imagine. Since the film is cast with Norwegian comedies you could expect improv and bloopers. There are two short improv scenes and also a quick blooper reel, definitely funny stuff. The extended scenes are about 8 minutes long and focus on three longer scenes from the film. There is a feature called on the visual effects of the film, which drew me immediately and it featured a breakdowns of several of the CGI shots and also focused on the different kinds of trolls. The behind the scenes, which ran almost 25 minutes, is a collection of clips from the shoot showing the cast and crew goofing off, prepping shots. This must have been a fun film to work on. Photo Galleries includes troll sketches and of troll habitats. Lastly HDNet: A Look at The Troll Hunter is promo featuring some clips, and a some sound-bite interviews. Jam-packed like I said huh?

“An enjoyably off-kilter hybrid of THE BLAIR WITCH PROJECT and WHERE THE WILD THINGS ARE.” – The Hollywood Reporter

Everyone will believe it when they see it! Norwegian director Andre Ævredal (Future Murder) presents an “enormously entertaining” (Variety) look at a creature thought only to exist in fairy tales when Trollhunter is uncovered on Blu-ray Disc and DVD August 23 from Magnolia Home Entertainment under the Magnet label. Shot in vérité style in the vein of popular films like Paranormal Activity and Cloverfield, Trollhunter follows three Norwegian film students as they travel to the mountains to catch a real-life troll on camera, a creature whose existence has been covered up for years by the local government. Their persistence quickly pays off as they trail a shadowy poacher, leading them straight into the path of the menacing trolls and documenting every last second of this “Trollhunter’s” heroics.

“The coolest monster movie import since The Host” (FEARNet) and “the best ‘found footage’ movie ever” (Screen Junkies), Trollhunter is beautifully shot, offering awesome images of the titular monsters destroying the Norwegian countryside. The Blu-ray Disc and DVD are loaded with special features including a making-of featurette, deleted scenes, an HDNet special on the film and the international trailer and will be available for the suggested retail price of $29.98 and $26.98, respectively

Synopsis
The government says there’s nothing to worry about – it’s just a problem with bears making trouble in the mountains and forests of Norway. But local hunters don’t believe it – and neither do a trio of college students who want to find out the truth. Armed with a video camera, they trail a mysterious “poacher,” who wants nothing to do with them. But their persistence lands them straight in the path of the objects of his pursuits: Trolls. They soon find themselves documenting every move of this grizzled, unlikely hero –The Troll Hunter – risking their lives to uncover the secrets of creatures only thought to exist in fairy tales.