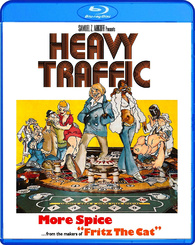 “Heavy Traffic” is writer-director Ralph Bakshi’s follow-up to his controversial animated adult film “Fritz the Cat”, which is a hard act to follow. It is quite an odd and spacey film, definitely something that came out of the 70’s for sure. It is definitely not for everyone but is still super entertaining for fans of Bakshi’s work and like most of his films it is chock full of sex and violence. Bakshi really has a unique visual style to his animated projects.  They are like nothing else that I have ever seen.  This is the first time that this film has ever been on Blu-ray, thanks to Shout! Factory. It is not the perfect release we are all hoping for after the fantastic recent release of Bakshi’s “Wizards” on Blu-ray but I would recommend for those hardcore animation fans.

Official Premise: Heavy Traffic, the second feature from writer/director Ralph Bakshi (Fritz the Cat), combines a quick-edit pace, a frenetic story line and an array of eye-popping animation and live-action styles. Michael, a young artist who lives with his neurotic mother and two-timing father, escapes the absurd and often ugly side of life on New York’s tough streets by satirizing its rich yet wacky characters in wildly entertaining cartoons. From the gruff homeless and wisecracking prostitutes to gun-toting gangsters and corrupt cops, Michael’s world becomes an outlandish kaleidoscope of shocking images and horrifying events that are either a testament of his wild imagination or a reminder of the strangeness of reality.

Shout! Factory is releasing “Heavy Traffic” on Blu-ray with a pretty decent 1080p transfer in 1.67:1 aspect ratio.  The film doesn’t look perfect but that is the feeling that I get from Bakshi’s films.  They are not perfect.  They are low budget and it looks as good as it can.  The mix of animation and live action is presented well and the colors are sharp. The audio track comes with an also decent  DTS-HD Master Audio Mono track.  It works for the dialogue and the film’s music. Doesn’t blow you away but does the trick. Unfortunately, there are zero special included to complement this Blu-ray release. I would have loved to seen Ralph Bakshi do up a commentary track on this release but I doubt he had any involvement at all.