Has another star been born thanks to director/writer Debra Granik? While watching the powerful performance delivered by New Zealand-born actress Thomasin McKenzie in the new drama “Leave No Trace,” it is impossible to not think about what Granik once pulled out of a relatively unknown young actress named Jennifer Lawrence. It is perhaps an unfair comparison considering that Lawrence received the first of her four Oscar nominations for her role as a tough, teenage Ozarks girl in 2010’s “Winter’s Bone.” However, McKenzie, whose previous experience has primarily consisted of TV work, has, at roughly the same age as Lawrence was eight years ago, provided something that is special to watch on the silver screen. Through her eyes alone she projects her character’s tough, determined nature which she also reveals is just a façade masking a 13-year-old girl’s desperation to please a father traumatized by war.

The present-day setting for “Leave No Trace” is a heavily forested park on the outskirts of Portland, Oregon. Widowed veteran Will (Ben Foster, Hell or High Water, The Messenger) and his daughter, Tom (McKenzie) live an isolated existence in the often damp and rainy woods. They survive by scavenging for food that nature provides them with only a few creature comforts of modern society. Will drills her on hiding techniques by making sure she leaves no trace of where she is at. Occasionally, they walk into Portland where he checks into a Veterans Administration hospital to get medications he later sells to other struggling vets to buy necessities for their life in the woods.

Their existence is changed forever when they are discovered by park rangers and law enforcement. Each is subsequently given a series of tests with social services questioning if she has ever been violated by her father. The system gives them a second chance to have a conventional life together as they are placed in a residence on tree/horse farm where Will is given a job. This new sense of normalcy is too much for Will as he cannot bring himself to be a part of society. The opposite happens with Tom whose introduction to a life outside of the one with her damaged father sparks a sense of curiosity within her and a desire to be a part of something more. This puts them on a collision course that will test the bonds of their relationship.

Based upon the 2009 book “My Abandonment” by American novelist Peter Rock, “Leave No Trace,” which premiered at the 2018 Sundance Film Festival, is a moving work of genuine sadness that will pull at the heartstrings of anyone who has a heart. McKenzie is a revelation of such proportions that it is hard to think of another young actress who has demonstrated this level of promise since Lawrence. Her delivery is flawless as she brilliantly plays a young girl who has been forced to grow up faster than anyone her age ever should. There is a certain sense of tragedy about her, yet you can tell it has also forged an iron determination within her.

I would be negligent if I did not mention Foster who once again demonstrates how skillful of actor he has become in recent years. Pain leaks out of every pour in Foster’s skin as his character is so consumed by PTSD from combat that he is putting Tom in danger every day they are on the run without thinking about what he is doing. Unfortunately, like someone from a Greek tragedy Will is man who has fallen so far and is so broken that he simply cannot be fixed again. Foster does not have a lot of extensive dialogue to recite but his quiet moments speak volumes.

Although her story lacks the complexity of “Winter’s Bone,” Granik, who co-wrote the screenplay with Anne Rosellini, also a producer and writer on “Winter’s Bone,” has created something that will haunt you for a while after leaving the theater. 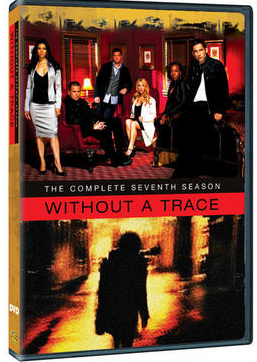 “Without a Trace” is a police procedural television drama series that originally aired on CBS from September 26, 2002 to May 19, 2009. It followed a group called the Missing Persons Unit (MPU) of the FBI in New York City. The seventh season was also the last for this show. In fact, it was announced on the finale night for this one that their will not be an eight season. This show really had some wit to it and really packed a solid cast. It was also one of the rare shows like “Castle” that in fact got better with each season. Thanks to Warner Archive for keeping this show alive as it has been releasing each season on DVD. I would have loved to seen this get the Blu-ray treatment like the recently released “The Mentalist” DVD is better than nothing. Like the past seasons as well, no additional special features included aside from the 24 episodes. A must purchase if you are a fan of the show to complete your series collection.

Official Premise: Senior agent Jack Malone (Anthony LaPaglia) is a tough, compassionate professional who, until recently, was the head of the special New York based FBI task force known as the Missing Persons Squad. Demoted after his renegade style got him into trouble one too many times, Jack still knows all too well that every second counts when someone vanishes, and begrudgingly adjusts to life with his new boss and the new head of the squad, Clark Medina (recurring guest star Steven Weber). Despite their best efforts, the team members are only human. As the agents work on varied and complicated cases, details about their personal lives continue to unfold. This season, Samantha Spade (Poppy Montgomery) deals with being a single mom and resourceful agent Elena Delgado (Roselyn Sanchez) recovers from a recent and unpleasant custody battle with her ex.