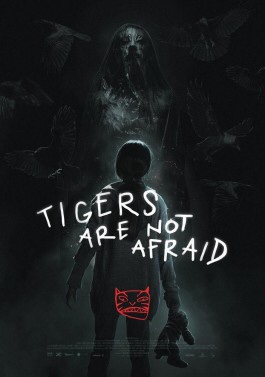 While there are certainly enough terrifying elements to make “Tigers Are Not Afraid” a horror film, this 2017 title from Mexican director Issa Lopez is a breath of fresh air for any cinephile. It first taps into the cartel-related violence plaguing Latin America to create an imaginative story concerning a group of orphaned children struggling to survive. Next, Lopez’s engaging script puts a spin on what would have been a tragic drama by inserting the ghosts of that violence and their desire for retribution. At not even 90 minutes running time, “Tigers Are Not Afraid” is a sprint that will leave your heart racing.

Lopez hooks us right away from a startling statistic: that in the 10 years since the beginning of the drug cartel wars (2006) in Mexico, that an estimated 160,000 people had been killed and another 53,000 had disappeared. Staggering numbers to be sure. However, it is made even more sobering when you are forced to consider how many innocent children in all of it have been turned into orphans with no where to go. If a random bullet does not get them, then human traffickers will.

We find young Estrella (Paola Lara) attending school and crafting a fairy tale in her class about a tiger when gunfire on the street erupts, causing all classes to be suspended indefinitely. While hunkering down, a teacher gives Estrella three pieces of chalk that represent three wishes for Estrella to use. It is not until Estrella encounters a dead body in the street that things become a little Stephen Kingish as a trail of blood follows her home like a snake.

After Estrella arrives home, we realize that both of her parents have vanished, and she is utterly alone. The father has apparently been out of the picture for a while, so it is the mother that is the focal point of her mourning. In desperation, Estrella uses one of her chalk pieces to wish that her mother would come back. A natural thing to want, but poorly though out as her mother comes back to her in the form of hushed whispers and ghastly images.

Estrella, always followed by the blood trail, ends up finding refuge with a group of orphaned boys led by a streetwise kid named El Shine (Juan Roman Lopez). This refuge is no place for a girl, especially since El Shine has recently stolen the gun and cell phone belonging to a notorious human trafficker who has murdered multiple people. As they try to stay one step of ahead of them, Estrella other wishes, compounded by her mother’s requests goes to show to be careful what you wish for, even if you do survive.

“Tigers Are Not Afraid” is a gripping, intense story that is plenty tragic even without the horror element. The plight of Mexican children entangled by this long war on the cartels and the one between them, is too easily forgotten by a news media starving for the next 24-hour news cycle. As for the horror element, it is done is such a minimalist way that it greatly heightens the story’s tension when it is introduced. The acting by the two lead children is performed well enough, but it is the story itself that is the star. If you have heart issues, then you might want to take your medication first before seeing “Tigers Are Not Afraid.” 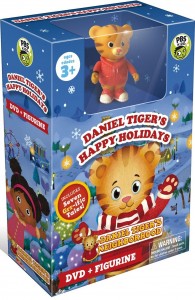 I love the idea of the show “Daniel Tiger’s Neighborhood” because it really help kids learn a lot and is still alot of this. “Daniel Tiger’s Happy Holidays” includes 7 Grr-ific Tales! Snowflake Day! (a special holiday double episode); “Katerina’s Costume”; “Dress Up Day”; Something Special for Dad”; “I Love You, Mom”; “Thank You, Grandpere Tiger!” and “Neighborhood Thank You Day”. Plus it comes with a Daniel Tiger figurine that has movable head and arms. That was the first thing that my daughter says “DADDY!! IT MOVES!!”. If you love the show, this is a must buy and priced very right!

Official Premise: Hi neighbor! Meet Daniel Tiger, and welcome to his neighborhood! Four-year-old Daniel Tiger invites young viewers directly into his world, giving them a kid s eye view of his life and making them feel like one of his neighbors. As they follow Daniel s everyday adventures, preschoolers and their families learn fun and practical strategies and skills necessary for dealing with everyday experiences, like showing appreciation to friends and loved ones, dressing up for Halloween, and celebrating holidays.

I remember watching “Mr. Rogers Neighborhood” when I was a kid. Now it is kind of a trip for me to have my own kid watch the new generation of that show with “Daniel Tiger’s Neighborhood”. I also like that this show keeps the legacy of Fred Rogers alive and working for today’s children. The music in this series is very catchy and a lot of fun. I found my daughter (trying to) whistle along it days after watching. I have a feeling that “Snowflake Day!” episode is going to be getting a lot of play over the next few months.