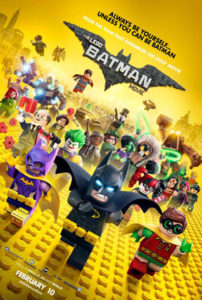 Was anyone surprised when “The LEGO Movie” premiered in 2014 that Batman was one of the best loved characters? Apparently Warner Bros. wasn’t because they have put their blocks together to feature the Dark Knight in his own LEGO adventure.

After a hilarious opening that features white lights, dramatic narration and the claim that it was Batman, and not Michael Jackson, who wrote “Man in the Mirror,” we learn that the Joker (Zach Galifianakis) is again scheming to take over Gotham City. Batman (Arnett) is not impressed but soon finds he is dealing with much more than the Clown Prince of Crime. Besides the regular rogue’s gallery of villains, including the Riddler, the Penguin, Poison Ivy and Bane we are also introduced to lesser ones like Scarecrow, Clayface, Mr. Freeze, Polka Dot Man, Kite Man and King Tut. The Joker has even lined up some baddies from other popular culture vehicles, including King Kong, Sauron, Voldemort, Gremlins and pretty much every other character Warner Bros. owns the right to. I was genuinely surprised when the Phantom of the Opera didn’t show up. Heck, he even recruits a group of “British robots,” because apparently they couldn’t use the word Daleks. For those uninformed, Batman requests you “ask your nerd friends.” What’s a Batman to do?

Very funny but a little bit all over the place, “The LEGO Batman Movie” is fun for all ages. Kids are going to love the on-screen imagery while mom and pop are going to laugh out loud out with each wisecrack. An example: when Batgirl asks Batman why the Batmobile only has one seat, he replies “because last I checked I only had one butt!” Batman is also joined by an all-star assemblage of DC heroes like the Flash and the Green Lantern. Even the under-appreciated Superman shows up. Individually these are funny characters but, allowed to gather en masse, they fight for screen time and for punch lines.

That being said, it’s still worth your time to join the Caped Crusader and friends in this bright and colorful adventure.