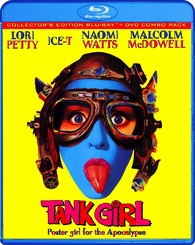 I remember the first time I saw “Tank Girl”, which was actually in theaters with an old friend on his mother at the young age of 12 years old. Yes, this film is rated R for Violence, Language and Sexuality (sorry mom). I remember being completely blown away thinking that this film was completely out there and outrageous! Not much as changed over the last nearly 20 years (ouch makes me feel old). “Tank Girl” is still a fun, ridiculous and campy wild ride. It also packs an impressive visual effects and solid cast including Lori Petty, Ice-T, Naomi Watts and Malcolm McDowell. It is not the best comic adaption ever but it does translate this comic quite well.

Official Premise: The year’s 2033 and since a humongous meteor hit earth, the world just hasn’t been the same. No movies, no cable television, no water! A mega-villain, Kesslee (Malcolm McDowell), the leader of Water & Power, holds the world in his grasp since he controls all the water…or so he thinks. Two colossal enemies stand in his way: (1.) The Rippers, an army of half-men/half-kangaroo people whose sole purpose is to bring down Water & Power and (2.) a chick with a tank and tons of attitude: aka Tank Girl (Lori Petty). Kesslee had better get a grip on reality and his water jugs because not even a run in her stockings is going to stop her from saving the world!

Thanks to Shout! Factory, the riot-grrl classic “Tank Girl” is making its Blu-ray debut as a Collector’s Edition Blu-ray + DVD. The 1080p transfer looks solid within its 1.78:1 aspect ratio. The film has a pretty big scale and still looks great for a early 90’s film. It also showcases the creature design by Stan Winston quite well. The DTS-HD Master Audio 5.1 is also quite awesome. The music in the film is funky and fun, I remember (and probably still do) that I had the soundtrack on cassette. So it works great with that and also the film’s campy yet fun action scenes.

In terms of special features, they are not overflowing but still worth checking out. There is a fun audio commentary with director Rachel Talalay and actress Lori Petty. There are some great interviews with director Rachel Talalay, actress Lori Petty and production designer Catherine Hardwicke (aka director of “Twilight”). There is a pretty fun (but a little short) Vintage Featurette. Lastly there is a Theatrical Trailer included. Overall definitely worth the purchase for this cult classic!