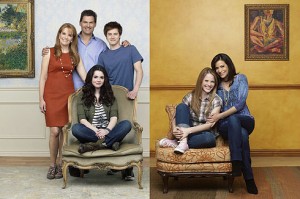 I have seen the promos for this show and overall I am of fan of ABC Family’s TV programming. The show is enjoyable with some funny and dramatic elements but overall seems lacking a major purpose. This set consists of the first ten episodes from the show’s freshman season. Overall the show might cater more to the female gender or teenagers but not to me personally. There are also no special features on this releases as well, which is a little disappointing.

The series doesn’t beat around the bush when it comes to revealing the whole switching at birth, as it happens in the first episode. Once they get it out the way the series really takes form having the two girls meet each others family and even moving in together. The show features the girls struggle with their own identities and prejudices against one another and while also facing everyday teenage drama like dating, friendships, and family.

I really had a problem with actress Vanessa Marano, it wasn’t so much her character but I just thought that she was really annoying. On the complete opposite, I really enjoyed watching Katie Leclerc and thought that she was really sweet. Watching great actresses like Lea Thompson and Constance Marie were highlights of the show. Lucas Grabeel known for his “High School Musical” fame sadly is only secondary character and really could have shined more.