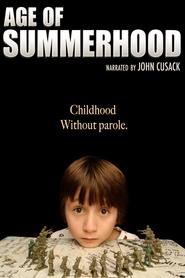 For some people, the start of summer means school is out and you have the next 10 weeks to just do nothing. Unless you were sent to camp. This is where we meet Fetus (Maisel), a very wise-beyond-his-years boy who has once again been sent away for the summer. Staying in a cabin that time forgot, named the Monkey Bin, Fetus is reunited with three other returnees: Grandpa (Jesse Camacho), who spends all day in his bathrobe, puffs on a pipe and often complains about his arthritis; Reckless (Scott Beaudin), the rule breaker and Toast (David Gibson McLean) who is introduced, via the smooth narration of John Cusack, as one who “likes guns.” We also meet New Kid

(Keegan Hiltz), who is given the moniker even though he’s been to camp before. If this all sounds fairly familiar, it’s because I think all of us, whether we went to camp or not, can think back to those few friends we had as kids that we still associate with today.

A cross between “Meatballs” and “Stand by Me,” “Age of Summerhood” makes great use of its outdoor locations to show kids as they are rarely portrayed on screen: as kids. I was certainly reminded of a time when you would leave the house at 8:00 a.m. and not come home until dinner, having filled the time between with adventures you shared with your pals. Be it making new friends or discovering your first love, childhood is that rare part of your life where YOU decide your fate. You can be the troublemaker, the lovesick optimist or, unfortunately, the sleep-walking bed-wetter. The unfortunate part is that he walks in his sleep and then wets in your bed!

The cast is another rarity – actual kids. There’s not a twenty year old playing thirteen in the place! All of the young actors bring an extra sense of believability to their performances just by being themselves. On the adult side, both McDonald and Flaherty deliver the laughs constantly. Also spot on is the film’s musical soundtrack, ranging from the theme from “St. Elmo’s Fire” as the camp’s wake-up music to such good times oldies as “Sweet City Woman.” If I had one problem with the film, which is not rated, is that it features some scenes that might be a little mature for its target audience. Of course, so did “Meatballs,” so “Summerhood” is in good company.

“Age of Summerhood” is currently available on home video and at Amazon and is a fine feature film debut for filmmaker Jacob Medjuck. Keep it in mind when school is out and the kids are looking for something to do.