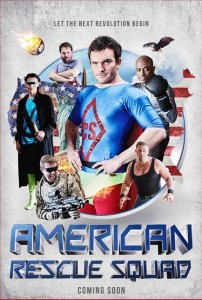 Imagine a Troma movie without any of the fun gratuitous nudity and violence. That’s “American Rescue Squad” in a nutshell. The creators behind this low budget flick have the know-how to realize what kind of movie they’re making. I just hate to think that a movie missing two components, as simple as naked people and gore, is what brings down this movie, but it does.

“American Rescue Squad” is a politically incorrect “Avengers”. Two superheroes, by the names of Personal Responsibility and Common Sense, have been away from the scene, but come out of retirement after a group of villains kidnap the Taxpayer. These villains are made up of the Freeloader, the Bible Thumper, and they’re all led by Congressman Dick Pansy. And just like any knowledgeable comedy movie that touches upon politics, it’s an equal opportunity offender.

There’s nothing too outlandishly offensive that should cause you to turn off the movie. There are jokes for both blue and red states, but luckily it never really grandstands and preaches a solid message. You can take what you want, but in an unbiased comedy like this, you would be wasting your time trying to read between the lines because there is nothing. None of the jokes are particularly clever, but silly for the sake of being silly. If you don’t have a rod up your butt, you should be able to chuckle every once and a while.

While it’s not about to join the ranks of “Airplane!” or “The Toxic Avenger”, it’s decent for what it is. It reminds me a bit of “Poultrygeist: Night of the Chicken Dead” because of how it adds nonsensical musical numbers for our stereotypes to sing. And as you could surmise, the songs are equally crude and vulgar. “American Rescue Squad” has a charm that only comes from shoestring budget movies with passable acting.

But I just can’t quite enjoy it because as I stated earlier, no blood or naked people. I know when it comes to excessive nudity and violence, I’m generally condemning other movies for doing that, but when it comes to Troma, that’s what makes them so enjoyable. It’s supposed to be silly and over-the-top, but “American Rescue Squad” doesn’t have that and when you don’t have squirting red syrup and bare breasted women or male genitalia to keep your dirty mind occupied, you start to really think about the flaws of a movie that’s created in the same vein. I don’t know if what’s more terrifying. That that’s how my own moral compass is guided in some pop culture or that that’s my big slam against a movie that could have been better. 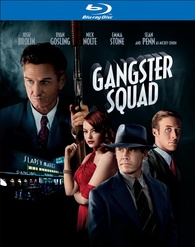 I am not the biggest fan of gangster films. My all-times favorites have been always been “Goodfellas” and “Casino” but besides those, I never really dig this genre. “Gangster Squad” is a movie with a great talented cast but suffers from a weak script and the same-old, same-ole gangster approach. Josh Brolin, Ryan Gosling, Sean Penn and Emma Stone all are good in the film but their performances suffer from being stuck in a box and not able to perform outside of it. This film was affected by the Colorado shooting last summer and was forced to re-cut the a shootout scene that took place in a movie theater. I feel that it was a smart move to re-shoot. If you like Gangster films, you might really enjoy this film but otherwise it feels like to be done already and nothing new here.

Official Premise: Los Angeles, 1949. Ruthless, Brooklyn-born mob king Mickey Cohen (Sean Penn) runs the show in this town, reaping the ill-gotten gains from the drugs, the guns, the prostitutes and – if he has his way – every wire bet placed west of Chicago. And he does it all with the protection of not only his own paid goons, but also the police and the politicians who are under his control. It’s enough to intimidate even the bravest, street-hardened cop – except, perhaps, for the small, secret crew of LAPD outsiders led by Sgt. John O’Mara (Josh Brolin) and Jerry Wooters (Ryan Gosling), who come together to try to tear Cohen’s world apart.

Whether “Gangster Squad” is good or not, it still packs a fantastic Blu-ray presentation. Warner Brothers delivers a two-disc combo pack set with a Blu-ray and DVD of the film. There are also two digital copies included, Ultraviolet and iTunes. I personally always prefer the digital streaming copy since you don’t have to use your own storage space on your device. The 1080p transfer is very sharp and work well with the tone of the film. The DTS-HD Master Audio 5.1 audio track works well with every gunshot and explosion. I also thought that Steve Jablonsky’s score really got presented very well.

The special features are pretty good as well. There is an audio commentary track from director Ruben Fleischer. It is not my favorite commentary track ever but does have some good info. “The Gangland Files” is a Picture-in-Picture overlay during the film that gives interviews and facts about the film. “Focus Points: The Set-Up” is a collection of fifteen behind-the-scenes featurettes which add up to abut 45 minutes together. There are seven deleted Scenes with an introduction from the director. “Rogues Gallery: Mickey Cohen” is a documentary about the famous gangster. “Then and Now Locations” is a collection of photos from locations. Lastly, “Tough Guys with Style” is a short piece with the cast about the production. 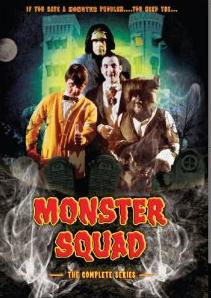 Not to be confused with the 80’s movie of the same name, “Monster Squad” was a campy Saturday morning kid’s action adventure series. It was created by the same team that was behind the 1960’s “Batman” series and has the exact same camp feel. Thanks to VCI Entertainment, all 13 episodes of this cult classic series are available again on DVD after being out of print for a long time. They are fully restored and are a great way to experience this 1976 series again on DVD. The episodes are still very fun…and did I mention they are campy?  This is a must own for all horror fans and lovers of classic monsters.

Official Premise: Originally screened on Saturday mornings on NBC in the late 70s The show stars Fred Grandy (The Love Boat) as Walt, a criminology student working as a night watchman in a wax museum. To pass the time, Walt built a prototype “Crime Computer”. When Walt plugged in his Crime Computer, the “oscillating vibrations” brought to life three legendary monsters. Dracula, The Werewolf and Frankenstein. These creatures hated and feared for centuries are now determined to make up for their past misdeeds by using their unique abilities to fight crime and bust super villains wherever they find them. Together they are the Monster Squad!

All 13 episode are included over two discs, the first disc includes 1: Queen Bee, Episode 2: Mr Mephisto, Episode 3: The Tickler, Episode 4: The Ringmaster, Episode 5: Music Man, Episode 6: No Face, Episode 7: The Astrologer.  The second disc includes – Episode 8: Ultra Witch, Episode 9: The Wizard, Episode 10: The Skull, Episode 11: The Weatherman,  Episode 12: Lawrence of Moravia and Episode 13: Albert/Alberta. Each episodes does look quite nice for a show that is over 35 years old. There is a little grain throughout but still impressive. There are really no special features on the release but to be fair, there is a stills gallery included. Lastly, there is an episode Synopsis on the inside of the DVD case. 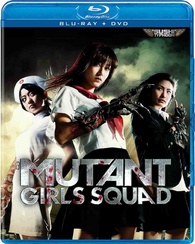 When some combine the directors of three of the coolest Japanese action-horror-comedy films you are destine for greatness. Noboru Iguchi is known best for the amazing “The Machine Girl”, Yoshihiro Nishimura is known for “Tokyo Gore Police” and Tak Sakaguchi has done “Yoroi: Samurai Zombie”. If you have never seen these three films and you are a horror fan…what is wrong with you? This film is funny, sooo over-the-top and just a riot to watch. I mean come-on a girl whose mutant power is to spawn a chainsaw out of her ass?! Or ninjas with guns for noses?! Does it get any better that that?

The film focuses on the character Rin (Yumi Sugimoto) and her realization that she is an Hiruko, a race of mutant creatures whose can transform their bodies transform and form strange weapons at will. Rin meet up with five other genetically-advanced girls who team up and use their mutant powers in order to defeat an evil prime minister.

The Blu-ray presentation on this film but look and sounds great. There is a lot of action and gore in the film and it is showcased very well. This release also comes with a DVD disc of the film along with the Blu-ray. I was impressed that there was also only a Japanese audio track, no dub. The special features are decent and include two behind-the-scenes featurettes. The first is called “Opening Day”, which focuses on a screening for the film. The second is called “The Making of Mutant Girls Squad”, short but sweet. There is also interviews with filmmakers, obviously which are subtitled, worth checking out for sure. Lastly there is a short film “Yoshi Zero”, which is a prequel to this film. Super cool!