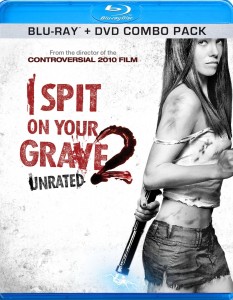 I think I may have mellowed out in my taste for certain types of films. When I saw the original “I Spit On Your Grave” from the late 70’s, I thought it was like nothing I have ever seen. In 2010, the film was remade by director Steven R. Monroe and I enjoyed it. It took the film to a new place and gave it an updated feel but the themes were a little too strong for me personally. This time around, I thought it was a bit of overkill (maybe it is having a newborn daughter). Jemma Dallender does a great job in this very trying and difficult role. I enjoy horror but this brand is getting a little much for me to stomach recently. This feels a little bit unnecessary.

Official Premise: “I Spit On Your Grave 2” stars beautiful newcomer Jemma Dallender (“Community”) as Katie, a beautiful girl on her own in NY, who is trying to make it in the cutthroat world of modeling. When Katie innocently accepts an offer to have new photos taken for her portfolio, the experience quickly turns into an unthinkable nightmare. Severely beaten, battered, bruised, and broken, she will have to tap into the darkest places of the human psyche to not only survive her ordeal, but to ultimately find the strength to exact her brutal revenge.

Anchor Bay delivered this film as a combo pack with a Blu-ray and DVD. The 1080p transfer looks good despite the gritty feel of the film. The DTS-HD Master Audio 5.1 track also delivers the suspense from Corey Allen Jackson’s score (He also did the score for 2010’s “I Spit On Your Grave”. In terms of special features, there is nothing like besides a few deleted scenes. I think this could have benefits from a behind-the-scene featurette or even a commentary track from cast/crew.