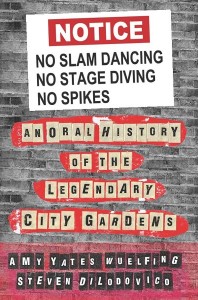 “No Slam Dancing, No Stage Diving, No Spikes” is an oral history of ’80s-era alternative, metal and punk rock music told through the portal of one club – Trenton, New Jersey’s legendary City Gardens. From Punk to Metal, from Ska and Reggae, New Wave and Alternative, if there was a band you dug through the 80′s and 90′s that never made the commercial airwaves, there’s a good chance they played at City Gardens.

Written by Amy Yates Wuelfing and Steven DiLodovico “No Slam Dancing, No Stage Diving, No Spikes” is a gritty multi perspective book that tells the tales of the fabled City Garden’s music venue which throughout the 80’s and 90’s was the only reason to travel to Trenton, NJ. As you delve through the books countless pages you will be able to better understand my previous statement as its wonder anyone went there at all. The book is jammed full of pictures and stories from the people who not only worked at the venue, but performed there and/or were just one of the many regulars who attended shows ranging from The Ramones and Butthole Surfers to Nine Inch Nails and the clubs famous 95 cent Thursday dance night. The book does a great job depicting an era when music was still raw and people went to shows to actually hear music not because it was the cool or trendy thing to do. Not only does it detail a good number of the shows held at the venue but it goes a step further by giving you when possible both artist and audience perspectives of the same event and if there were colorful things going on behind the scenes staff stories are added to serve as the proverbial icing on the cake.

Even if you never attended the venue or knew of its existence “No Slam Dancing, No Stage Diving, No Spikes” is a must read! The book grabs your attention and transports you back to a time when the underground music scene was raw and untainted and when people went to shows to actually check out new bands and not just because it was the “cool” thing to be doing.