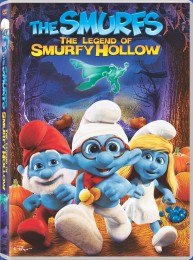 I grew up watching “The Smurfs” as a kid back in the 80’s and have always loved watching them. In 2011, “The Smurfs” was made into a CG/Live-action movie, which because a huge hit.  “The Smurfs 2” was released this past summer and did not follow the same path as the first one.  I guess they smurfed up on it or something. “The Smurfs: The Legend of Smurfy Hollow” is a 22-minute short that continues the Smurfs adventures this time in a seasonal special.  Cute special for kids and could be a fun to revisit each year.

Official Premise: When Brainy Smurf is favored to win the annual Smurfberry Hunt for the ninth year in a row, Gutsy Smurf sets out to discover how Brainy wins every year. Gutsy’s investigation takes him into spooky Smurfy Hollow-and right into Gargamel’s trap! Can Brainy and Gutsy, with the help of Smurfette, put aside their rivalry before Gargamel captures them-or worse, they come face-to-face with the legendary ghost, the Headless Horseman?

I have admit, I was a little taken back at the fact that this DVD’s cover art suggests a CG animated short like the 2011 and 2013 films. The opening and closing of the show is in CG but the bulk of the story is a traditional animated short. This might disappoint the kids that are introduced to these new films and looking for a new chapter. There are no additional bonus features included here besides some Sony trailers. So the question becomes this is worth the $4.99 that it costs (via Amazon), which is very cheap but you are also getting a 22-minute film on DVD with no special features. So it is a toss up.