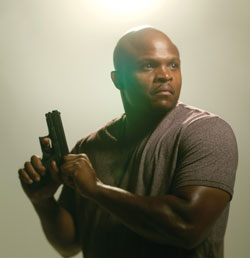 IronE Singleton is known best for his role of T-Dog in AMC’s “The Walking Dead”. His character has been a key aspect of the show for the last three seasons, until his recent demise in the fourth episode of the third season. Media Mikes had a chance to reflect with IronE about his role on the show and what we can expect next.

Mike Gencarelli: Tell us about how you prepared for shooting your death scene?
IronE Singleton: Mentally, I had a lot of time to prepare because I got word about a month in advance. So I was ready to do that. Plus, when I originally signed on it was only for two maybe three episodes and I ended up lasting three seasons. As far as the physicality was concerned, I had to wear a prosthetic. They put me this pasty stuff on me and let it dry on me for like an hour. Once it dried they cracked it off and that is what they used when the zombies were biting me and pulling out all the guts and veins etc. They were pulling from the prosthetic.

MG: I am a big horror fan and I cringed with your neck scene.
IS: Yeah, I hear that a lot. During one interview I had recently, one guy said he was eating his pizza and he had to stop eating since he almost hurled. People say they can’t eat when they watch this show. They love it but they can’t eat.

MG: What has been your highlight working on “The Walking Dead”?
IS: I have a two and a quarter season highlight reel. Every day was total bliss. Every day was something that I will relish for the rest of my life. I had great times throughout. I honestly did not have one bad day on set. It is hard for me to pin point because every day was like that. I would look forward to going in to work, getting the handshakes, the hugs and kisses. That is what I did everyday for two and a quarter seasons.

MG: Are you surprised with the fans reaction to your character T-Dog?
IS: It is a bit overwhelming. In a good way – in a great way! The amount of support and love that T-Dog is getting showered with is unbelievable. Let’s just say it has been a very emotional week for me since the episode has aired, to say the least. When I did “The Talking Dead” after my final episode, I had to choke back the tears. I am just taken back by all the love from fans, not just in the US but all over the world.

MG: What is it about “The Walking Dead” and it killing off key characters each season?
IS: It is so similar to real life though. When people die you don’t expect them to die unless they have a terminal illness. You just don’t see it coming. That is what happens on “The Walking Dead”. That is the stuff that grabs you the most.

MG: I was hoping for a T-Dog vs. Merle showdown this season.
IS: I think you and millions of others were waiting on that. Ever since the rooftop scene, where T-Dog dropped that key, people were talking about us meeting up again. It would have been great TV.

MG: What season was the most challenging for you?
IS: Season one…we are going to go with the rooftop scene. Oh my goodness, it was like 107 degrees but with humidity it was like 115-120 degrees. I almost fainted a few times and that is something that I don’t do. Having played football for 15 years, I have never come close. So there I was on this rooftop about to pass out, I was thinking “Man that is a big wuss move” [laughs]. Season 2 also was rough with the highway scene, where I cut myself and we had to do that twice. That was also a big one for me, as well as the well-walker scene.

MG: What do you got line-up next in the cards?
IS: I’ve got a project with Neve Campbell called “Sworn to Silence”. I play a small town cop, who was once a former army ranger. He moves to a small Amish community and him and Neve’s characters are out searching for a serial killer. This is based on a best-selling novel by Linda Castillo. I also have another movie “A Box for Rob” that is currently making its way around the festival circuit. I am also working on an autobiography, which I am currently searching for a title. It is related to my life coming from the projects and making it all the way to Hollywood. I am co-writing that Juliette Terzieff, she is the founder of The Zombie Survival Crew. We are halfway done with it and it is currently slated to be published in February 2013. Lastly, I have my song “We Are the Walking Dead”, which is available to purchase on my website: www.ironesingleton.com.

You may not be familiar with the name Irone Singleton but that’s going to soon change. A working actor for 15 years, he got by with small parts in films like “Fled” and “Remember the Titans.” Then came “The Blind Side.” He caught everyone’s attention with his role of “Alton,” the project tough guy who tries to bully Sandra Bullock’s character, only to have the tables turned on him. A graduate of the University of Georgia, Singleton received a dual degree in Theatre & Speech Communications. His most recent project is the television series “The Walking Dead.” Irone recently took some time out to talk to Movie Mikes to discuss his career and his now TV show “The Walking Dead”

Mike Gencarelli: Tell us about how you got the role on the upcoming TV series “The Walking Dead.”
Irone Singleton: I received a call from my agent in Atlanta about The Walking Dead. I wasn’t familiar with the comic book but when I heard that Frank Darabont (director of “The Shawshank Redemption) was putting it together, I immediately called my agent back and said yes! I auditioned for it and the rest is history.

MG: What can we expect from your character T-Dog?
IS: T-Dog is great character, and any character I play I try to shake them up with my life experiences. He grew up in the inner city and got a break playing Division 1 football. He’s a happy man…he has a conscience. But he’s fighting his conscience because humanity has been stripped away because of this apocalyptical world that has taken over. People are committing crimes without impunity and he has to decide “do I become a part of this world or do I continue to hold on to my humanity?” He’s an “everyman.”

MG: Did you read the comic after being cast?
IS: I’ve actually read everything BUT the comic book. I’m waiting, as we speak, on the Compendium. It’s been weeks since I ordered it and they still haven’t delivered it. I’m sure I’ll get it soon. But I’ve read just about everything else I can get my hands on off the Internet.

MG: Did you get a chance to meet Frank Darabont?
IS: I’ve met him a few times on the set. My only disappointment is that I haven’t been able to follow his directions yet, since he only directed the pilot episode. When I heard he was only directing the pilot I was like “Nooooooo!” I hope I last through next season. I hope I don’t die off before I get a chance to be directed by him.

MG: How was it working on the Oscar nominated film “The Blind Side”?
IS: That was my moment! Have you ever heard a person say “that was my breakthrough moment?” Much of Hollywood didn’t know I existed until that film. At that point, I had already been in the business for fifteen years but still hadn’t “made it.” But John Lee Hancock (the film’s director), after the audition said, “We’ve found our Alton” (IronE’s character in the film). After that God has been blessing me with a lot of great opportunities. Everything has been great and it’s all going at such a fast speed. I auditioned for the film in March 2009, started shooting in April and ever since I’ve been in six or seven different major projects. To work with Sandra Bullock, who’s one of the best actors in our business…she’s such a wonderful person. She has a great spirit. What you see on TV is who she truly is. She has such a warm personality.

MG: Can you believe the response the film received?
IS: It’s incredible! The budget was $30 million and I was told that the producers would have been happy to have made $60 million. So to make $100 million would have been mind boggling. To date it’s made over $300 million. Do you know how insane that is? Nobody expected it. The Blind Side is such a great story. When you reach out to somebody you don’t know and give them love regardless of who they are or their circumstances or background, even God says “I’m going to be a part of this because I want the world to see it.” When we do something special, that’s exactly what happens. That’s one of the reasons I became an actor. I wanted to have a positive effect on the world just like the movie did. To see the effect the movie has had on the world is more validation that I made the right career choice.

MG: Besides “The Walking Dead,” what else are you working on?
IS: I have a supporting role in a project called, “The Hungry Rabbit Jumps,” which stars Nicolas Cage. In that film, I portray the character “Scar,” who is an intelligent henchman under Guy Pearce’s leadership. Guy runs a secret organization that takes out contracts on people. Also, I recently played a Priest in the new ABC pilot “Detroit 1-8-7,” which aired in late September. Then there’s a VH-1 project being produced by Queen Latifah called “Single Ladies,” which should premiere in Winter 2010. Another project you can catch me in is a film called “A Box for Rob,” where I am starring as an FBI agent named “Tim.” That movie will be released in 2011. It’s my first starring role and was a great opportunity to break out of the “villain box,” because I didn’t want to be typecast as “Alton” [The Blind Side]. For anyone who knows this business of acting, for someone to book two major projects in a year is great, but since “The Blind Side” I’ve booked seven. God has been so good to me. Thank you, God!