If there is a young girl in your house…why are you still reading this review?! You need to immediately go out and pick up this book, order it on Amazon with Prime shipping, I don’t care just get it. It is a must have for any “Frozen” fan. This deluxe picture book features the retelling of film “Frozen” through beautiful artwork. Of course if you are a “Frozen” fan you aren’t going to need this but if you so happy to be just discovering the film (were you living under a rock), also included are the full lyrics to each of the film songs! Wait, there is still more, what use is having the lyrics if there is no music? There is another added bonus, since this book also includes a CD featuring three instrumental tracks!

I am still shocked at the amazing fan response to this film but I am very happy that it did. When I saw the film in theaters, I was just blown away. It is rare that a such a brave film with such wonderful music and songs gets good play. I am sure all you parents are very tired of listening to “Let It Go” over and over…but do me a favor and next time your daughter is singing it look at their face and tell me that they aren’t happy. This film brings happiness to people and I am behind that. This book will continue that trend for sure! 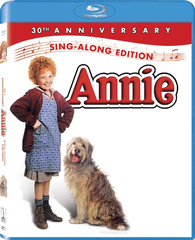 Who doesn’t love little ole’ Annie and her wonderful songs like “Tomorrow,” “Easy Street,” “It’s the Hard-Knock Life”.  This wonderful Blu-ray release from Sony celebrates the film’s 30th Anniversary with its very impressive Sing-Along Edition.  This film was adapted from the smash Tony Award®-winning musical comedy based on the “Little Orphan Annie” comic strip.  It also packs one of the best musical casts including Albert Finney, Carol Burnett, Aileen Quinn, Bernadette Peters, Ann Reinking and Tim Curry.  I remember the first time I saw this film with my then girlfriend (now wife) many years ago.  This musical still brings a smile to my face and has you singing along with little Annie and her friends. Highly recommended!

SYNOPSIS: The charismatic little orphaned Annie’s (Aileen Quinn) luck changes for the better when billionaire Oliver Warbucks (Albert Finney) arrives at the orphanage looking to take one of the children for a short time. Annie soon charms the billionaire with her lively warm nature and together they set out to search for Annie’s parents. With the mean head of the orphanage, Miss Hannigan (Carol Burnett) attempting to hinder their plan, Annie’s search will prove to be quite a heartwarming journey.

This 30th Anniversary Blu-ray both looks and sounds amazing.  The 1080p transfer really brings out the color in the film and looks very sharp.  It’s DTS-HD Master Audio 5.1 track works perfectly with the sounds and sounds just amazing!  This release also comes with an Ultraviolet digital streaming copy.  The special features are not amazing but still good.  Exclusive to the Blu-ray is “Sing-Along with Annie”, which allows fans to sing along to all their favorite songs.  There is also a musical performance of “It’s the Hard-Knock Life” by pop group Play. There is only one production featurette called “My Hollywood Adventure with Aileen Quinn”, short but worth checking out. Lastly, the Blu-ray also includes the original trailers and TV spots from the film. 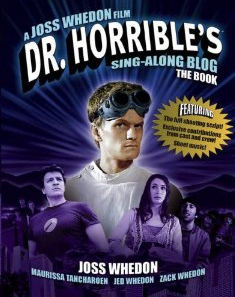 Any fan of “Dr. Horrible” needs to pick up this book ASAP. It is made for true fans and made with love from its authors. The pages are very colorful and packed with great pictures and illustrations. There are great behind the scenes shots during production. It still surprises me how this little web-series went on to become an Emmy award-winning pop-culture phenomenon. Either way it is one of my favorite series and soundtracks of the last decade easily.

Now let’s get to the goodies, this book comes with exclusive new material from Joss and the “Horrible” team. There are great new photos, which are really sharp and also very crisp. The book plays like the read-a-long with the series, including the full shooting scripts. Also If you are a musically inclined there is also sheet music included for every song. Also mega fans, will enjoy full lyrics for “Commentary: The Musical”.

The further and further I go on this book it just feels like the ultimate fan official book for the ultimate web-series. The book also covers the expansion of the series into pop-culture with toys, fandom and even the awards ceremonies. Also fans are going to love the character bios included even for the minor characters in the series. Although the book doesn’t close with hints about a follow-up series, I know we all still have our hopes set out for that and this book will surely hold you over till then.