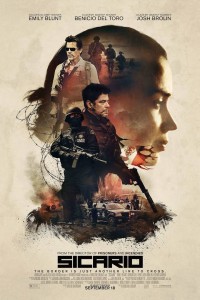 From the first gunshot to the final frame, “Sicario” takes hold of that trepidation in the pit of your stomach and doesn’t let go. At times, it shakes that anxiety in your guts violently. At other times, it merely plays with it like a kitten. “Sicario” is a two hour intense ride through the battlegrounds of the Mexican Drug War. “Sicario” is merciless and unflinching in its perspective of the drug trafficking currently taking place at the United States southern border.

The film opens with Kate (Blunt), leading a mixed group of federal agents and local police in the raid of an Arizona home. What these law enforcements agents are looking for horrifically becomes clear once they discover the bodies of people in the walls of the home. It’s stated halfway through the film, and it’s actually a sad real fact, but raids like this are becoming more common without any end in sight. If anything, they’ve only gotten worse. Kate’s work is professional, clean, and by-the-books.

Her work attracts the attention of Matt (Brolin). He doesn’t seem important since he’s the only one in a meeting of law enforcement leaders and officials wearing civilian clothes. Matt wants Kate for a special assignment into the heart of Mexico, but he won’t reveal too much to her. Matt is clearly scheming and things are even more ominous for Kate as the stoic Alejandro (Del Toro) enters the picture. His arrival is unquestioned and without introduction, leaving Kate deeper in the dark. Along with Kate, we follow foreshadowing breadcrumbs cautiously, because just like her, we know there cannot be a good outcome.

Once everything comes to fruition and everything is revealed, it’s a fairly basic story. But with the right cast, the right direction, the perfect balances of themes, and blending all those together is what makes “Sicario” one of the best movies of the year. The exciting bliss we watch in “Sicario” comes down to director Denis Villeneuve. Without Villeneuve’s vision or his willingness to mold and shape “Sicario” into something more we would have been left with a run-of-the-mill action movie. Instead, Villeneuve has put together a slick, chilling thriller.

Just like in “Prisoners” and “Enemy,” Villeneuve is becoming a master of dread. Villeneuve harnesses a dense soundtrack, echoing our fears about what’s ahead, and buries it under unsettling close-up. Villeneuve has an eye for gorgeous establishing shots and has a keen instinct about what puts us on the edge of our seat. “Sicario” cleverly unnerves us as we closely follow characters that are armed to the teeth and ready to fire off some deadly shots.

Del Toro, Blunt, Brolin, and everyone else is spot on. Del Toro, like he usually does every once and awhile, reminds us why he’s an Oscar winner. Just his icy cold stare speaks miles about what kind of man Alejandro is. Blunt perfectly encapsulates Kate’s lone wolf strength at the beginning, but nurtures that slow grip of fear that inevitably paralyzes Kate. Meanwhile, Brolin handles Matt like an average Joe who has every little detail plotted out behind his childish quips.

The final thing that makes “Sicario” undeniably good is the ethical questions it asks. They’re proposed in a very unique way. “Sicario” bluntly states the first part of the question while letting the viewer ponder what the second half is. You may not know you were asked a question once the movie is over because you’ll still be frozen in its grasps. But once you leave the theater, you’ll definitely have something to ponder. And if history is any indication, along with Kate’s story, you won’t like the answer to that question.