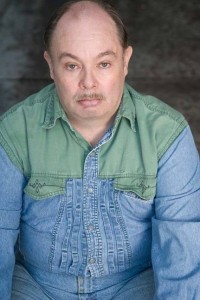 Palmer Scott is known best from working on the sketch show “Tim and Eric’s Awesome Show, Great Job!” and his Sit on You sketch. He also appears in the “Tim & Eric’s Billion Dollar Movie” as the Shrim God. Media Mikes had a chance to chat with Palmer about his work with Tim and Eric and also his new book.

Mike Gencarelli:  Can you tell us about the origin of the Sit on You skit from “Tim and Eric’s Awesome Show, Great Job!”?
Palmer Scott: I have been acting since I was 10. I did a few things before coming to California and getting representation. I got a call from my agent one night to be at this place to read for Cartoon network. I asked if it was voice over but she told me no, it was going to be live action. They wanted comedic actors doing dramatic monologues. I didn’t really have anything like that. I ended up taking a monologue from a play I had done previously and cut it down some. A day or two later they asked me if I would listen to this song and come in a little later and do a dance number for them. I had seen one or two episodes of “Tom Goes to Mayor” but I had never seen “Awesome Show”. I didn’t even know that’s what it was called then. I wasn’t sure what to do so I dressed all in black and did a few different things. Tim and Eric were there watching me and at one point Eric told me what I was doing was not sexy. They asked to try a couple things and if I had a denim shirt. I told them yes and they asked me to come back tomorrow after thinking about it over night. Tim and Eric eventually ended up busting a gut and said that what we are going to film. I had to try and remember what I did after watching myself on a tape. I showed up that day for filming and there was a bunch of people they had brought in. The idea was to go to a park for some of it but I had suggested this small area behind the studio. We ended up doing it basically in their offices. There was only one part that ended up being cut. I was worried though when I had to sit on the guys head. I didn’t want to fall or break wind on his face. I was supposed to sit on this small 14 year girl. I was so sacred I was going to fall on her and break her back. It was sort of a basement like setting and I think it wound up looking to cheesy for Tim and Eric so they cut it.

MG: Have you been surprised with the response this one skit has gotten?
PS: Good god yes! The first job I booked in California was as a guest star on “Frasier” in 1997. I have done “Nip Tuck”, a bunch of commercials as well as Shakespeare in the Park. What do I get known for? This silly little thing. I love it! In 3 months we had 700,000 hits on YouTube. Adult Swim ended up pulling it because they wanted to sell a DVD of the series. I think I would have gotten a lot more hits if the video hadn’t been pulled. There ended up being several different remake versions of the song. It has gotten a variety of responses.

MG: What has been the strangest thing they have asked you to do for the show?
PS: Tim and Eric will ask me to do things and I end up sitting back saying “What the Hell?” I will do it for them. They have been so good to me that I don’t think I could ever say no to them. I really admire what they have done and how they have treated me.

MG: Can you tell us about your role as the Shrim God?
PS: I have not seen the movie. I don’t even know what shrim is. From what I have seen I am assuming it has something to do with kids and diarrhea. They called me about a month before to see if I would do the film. I of course said yes. They ended up changing my shooting day as I guess Ray Wise who I love was there. I had to be in Palm Springs and on my way there it was lightly raining. There is a sharp interchange and I was driving a little too fast, spun out and got a flat tire. What I found out was that about 3 hrs earlier there had been an accident there and I had hit an oil slick from that. About 15 minutes after I had my accident there was another accident. I ended up having to drive the rest of the way on a donut. It was 90 miles in the rain on a donut. It was not a great start to the day. When I got there they had a costume for me. They filmed the scene with Ray and bunch of little boys dressed in burlap sacks first. I could just see where this was going. This whole time I am wandering around in a skin tight costume.

MG: What can you tell us about your upcoming book?
PS: I am a working actor. One of the biggest problems for an actor is when you do work and people take their time paying you. I have had a couple people who have waited up to 90 days to pay me for my work. That put me behind on bills. I got into a bind and ended up asking for some help. A talked with a couple writers who said they couldn’t help me financially but they thought what I had to say was pretty funny. We started putting together stories about my work and my life. I also am I cat person so there is stuff in the book about that as well as the things I have done for Tim and Eric. It’s been quite a collaboration. We were hoping to get it out for the general release of the film but it may end up coming out a week or so after that.

MG: What other things do you have going on this year?
PS: I just finished a family movie called “The Stray” that is being released in Europe this month and in the States in August. I really enjoyed playing the spooky janitor role in the film. I also will be performing in a stage performance of “A Mid-Summers Night Dream” in Semi Valley.