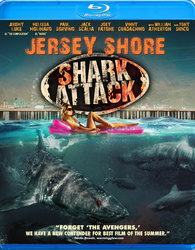 Whenever I see the word shark in a film’s title, I come running. Personally, I have never seen a single second of MTV’s “Jersey Shore” (reporting proudly). But I don’t think I missed much plot, this film a just about a bunch of dumb Guidos running around after sharks. It definitely packs a few good laughs including a cameo from Joey Fatone but overall misses on all other accounts. The sharks are actually really poorly done and not very intimidated. Honestly though with a title like “Jersey Shore Shark Attack”, the film delivers exactly what you should expect from a title like that.

Do you really need a premise described for this film?  It’s called “Jersey Shore Shark Attack”.  It is the Fourth of July and Seaside Heights is the place to be in New Jersey! That is until an illegal coastal drilling operation causes a horde of man-eating albino bull sharks to attack the cities patrons. Guess what? It is up Jersey’s finest crew of idiot Guidos to fight off these ravenous sharks before the whole town is consumed.  The Blu-ray itself looks good with its 1080p transfer and the audio is decent as well but nothing to call home about.  The special features including an audio commentary track from executive producers Barry Bernholtz and Jeffrey Schneck, as well as producers Peter Sullivan and director John Shepphird.  Lastly there is a quick production featurette called “On Set: Jersey Shore Shark Attack”, which plays like a mini-episode of “Jersey Shore”.

Leave it up to Syfy to mash up “Jersey Shore” with albino sharks.  Also keep an eye out for actors like Paul Sorvino, William Atherton and Jack Scalia who pop in. Unless you are a hardcore SyFy creature feature fan, then I suggest you completely stay away from “Jersey Shore Shark Attack.” I just would have liked to have seen more Guidos get eaten by the sharks, personally. I still haven’t figured out which Vinnie was killed in the beginning 😉