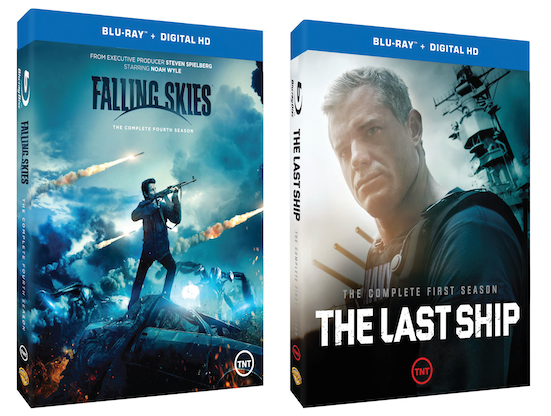 To celebrate the Blu-ray releases for two of TNT’s biggest shows “Falling Skies” and “The Last Ship”, Media Mikes would like to give our fans a chance to win a Blu-ray of their latest seasons. If you want to win this great prize, please leave us a comment below or send us an email with your favorite TNT series film. This giveaway will remain open until June 12th at Noon, Eastern Time. This is open to our readers in US and Canada only. One entry per person, per household. All other entries will be considered invalid. Media Mikes will randomly select winners. Winners will be alerted via email.

Falling Skies – TNT’s alien-invasion saga from DreamWorks Television, TNT Productions and executive producer Steven Spielberg – will return to Blu-ray™ and DVD with its complete fourth season on June 2. The two-disc Falling Skies: The Complete Fourth Season Blu-ray and three-disc DVD set will include all twelve episodes from the fourth season, as well as hours of exclusive special features including behind-the-scenes footage, character interviews and more. Falling Skies: The Complete Fourth Season comes to Blu-ray and DVD in advance of the hit drama’s highly-anticipated final season, slated to debut on Sunday, June 28, at 10 p.m. (ET/PT) on TNT.

Falling Skies chronicles the extraordinary story about life and survival in the wake of a catastrophic alien invasion that leaves most of the world completely deliberated. Starring Noah Wyle (Tom Mason) as a college professor who becomes an unlikely resistance leader following the alien attack, the fourth season opens as the nightmare is just beginning for the humans battling the alien force. In season four, the Mason family and the remaining 2nd Mass suddenly find themselves under brutal attack by a new Espheni war machine – and a new, deadly creation unlike anything previously encountered.

The Falling Skies: The Complete Fourth Season two-disc Blu-ray and three-disc DVD set will feature the complete fourth season with all twelve 44 minute episodes. In addition, the set will package hours of special features including an exclusive featurette Tom Mason: A Man of Tomorrow, character interviews, inside-the-episode clips, season four prequels and a Comic-Con panel interview featurette. Falling Skies: The Complete Fourth Season will be available for the suggested price of $49.99 on Blu-ray and $39.98 on DVD.

The Last Ship – TNT’s top-rated action series starring Eric Dane and executive produced by blockbuster filmmaker Michael Bay – will make its Blu-ray and DVD debut with its complete first season on June 9. The Last Ship: The Complete First Season two-disc Blu-ray and three-disc DVD set will include all 10 episodes from the series’ first season, as well as hours of exclusive bonus features including commentaries, exclusive featurettes, behind the episode clips, cast interviews and more. The Last Ship: The Complete First Season comes to Blu-ray and DVD in advance of the highly-anticipated season two premiere on Sunday, June 21, with a two-hour premiere at 9 p.m. (ET/PT).

Based on William Brinkely’s popular novel, The Last Ship chronicles a global catastrophe that nearly decimates the world’s population. Because of its positioning, the Navy destroyer U.S.S. Nathan James avoided falling victim to the devastating tragedy. But now, Captain Tom Chandler (series star Eric Dane) and his crew must confront the reality of their new existence in a world where they may be among the few remaining survivors.

The Last Ship: The Complete First Season two-disc Blu-ray and three-disc DVD set will feature the series’ complete first season with all ten 44 minute episodes. In addition, the set will exclusively package hours of special features including commentary tracks, two new exclusive featurettes, character pieces, behind the episode clips, cast interviews and more. The Last Ship: The Complete First Season will be available for the suggested price of $49.99 on Blu-ray and $39.98 on DVD.