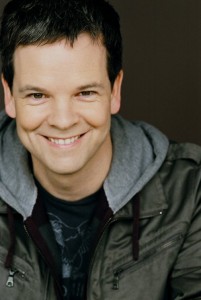 Kevin Shinick is the known best for being the showrunner/writer/main voice talent/voice director on the animated TV series “MAD”, as well as the writer/voice actor/creative director on “Robot Chicken”. He has been nominated for an Emmy on this work for two shows. He also recently co-produced and narrated the “Robot Chicken DC Comics Special”. Kevin took out some time to chat with Media Mikes about those two roles and also what else he has planned like releasing this first issue of “The Avenging Spider-Man” with Marvel.

Mike Gencarelli: How does it feel to be nominated two years in a row for the Emmy for Outstanding Animated Program Short-format, last year for Adult Swim’s Robot Chicken and this year MAD?
Kevin Shinick: I couldn’t be more excited. Especially since this is our first Emmy nomination for MAD and I know how hard we all work on the show to keep it funny and topical. It’s also surreal, because the last time I won it was for working with my friends on Robot Chicken and this year I’m up against them. But to prove how familial it all is, Seth is actually the main voice in the MAD episode that’s nominated for the Emmy and I just got finished doing more voices for them for their next season. So there’s good blood all around. Although that being said, please vote for MAD.

MG: Out of all the hats you where on “Robot Chicken”, as a writer/voice actor/creative director, what is your biggest challenge?
KS: Being Creative Director over at Robot Chicken meant following a sketch from its inception all the way until you saw it on TV. This meant making sure the costumes, sets and designs all matched what we were thinking about in the writer’s room, so that was the most time consuming, but it also prepared me for running my own show over at MAD. There I’m a producer, writer, director and voice talent and everything in between. In the end I’d say the writing is still the most fun, although also the most demanding. And doing voices is always a blast no matter what show I’m on.

MG: Tell us about working on “Robot Chicken DC Comics Special” on Adult Swim, where you are the co-producer and voice the Narrator and other characters?
KS: As I mentioned before, the Robot Chicken guys and I are really like family so despite the fact that I’ve left to create my own show, I always keep at least one foot in that world. And because my schedule is so tight with MAD it doesn’t leave me time to work on the actual series, but I do make time for the RC specials. And in this case, it was even more rewarding because it also meant working with another great friend of mine, Geoff Johns. It was his idea to do an all DC Comics special and so when we all came back together it was like the perfect storm. And I think you’ll definitely get a sense of the fun we had doing it when it airs tonight. Also, the chance to play the narrator which was originally played by the great comedian/actor Ted Knight was a dream come true.

MG: How do your tasks of showrunner/writer/main voice talent/voice director on “MAD” differ than your work on “Robot Chicken”
KS: It’s very similar, but the tone is different. Essentially the network was looking for a show like Robot Chicken that wasn’t so dark and could air during prime time hours. So right off the bat we’re aiming for a younger demographic. Second, Robot Chicken has a great time focusing on retro things like He-Man and such while MAD tries to stay topical and poke fun at things that are out there currently.

MG: Tell us about MAD’s upcoming Halloween & Christmas Specials and what are we in store for?
KS: Last year’s MAD’s Halloween special is the episode that is nominated for an Emmy this year and it was definitely an awesome episode. So this year I wanted to top it. So far I’m really excited with the bits we came up. Starting off of course with our movie parody, FrankenWINNIE. A spoof of Tim Burton’s Frankenweenie, only Christopher Robin has to reanimate his beloved Pooh after a horrible accident had destroyed him. It’s coming out great and is some of the finest stop motion I’ve seen.

MG: Not only animated cartoons, tell us about your comic work as well with releasing your first Avenging Spider-Man #12 comic for Marvel?
KS: Again, it seems to be a superhero September for me. Yes, my Avenging Spider-Man #12 comes out this Wednesday, September 12th. I’m incredibly excited for this because I think it’s something that’s going to blow your mind. Not only is Spidey teamed up with everyone’s favorite mercenary, Deadpool, but you’ll also see Spider-Ham and a few other crazy characters from Spidey’s past who will probably not lend the help the webhead is hoping for.

MG: Tell us how you ended up guest staring on NBC’s Grimm and tell us about your experience?
KS: I’ve always been an actor as well, but with so much going on in my writing world there’s not always time to do both. But lately I’ve tried to make time for each because I’m equally passionate about my acting. The Grimm episode was just an audition I got, but when I read the role and saw that this guy was secretly a Porcupine Man I thought, “I have GOT to get this role.” Luckily the universe felt the same. And the cast and the crew were really great so it was a fantastic experience from top to bottom.

MG: You are also planned to guest star with Alfred Molina, Ving Rhames and Jamie Bamber on David E Kelly’s medical drama pilot for TBS, “Monday Mornings”, tell us about that?
KS: I can’t talk too much about that now, but it will air in January and it’s a great medical drama from the wonderful mind of David E. Kelly.

MG: Lastly, what’s the deal about this date with Angelina Jolie?
KS: Ha! This is one of those things that’s surreal in hindsight, but at the time was just a lovely evening. I was performing on Broadway in a production of The Seagull with Jon Voight ages ago and he and I had become close, so when he said to me, “My daughters coming to town. How would you feel about taking her to dinner?” I said, “Sure.” Not knowing this was the same woman who would later become People Magazine’s Sexiest Woman Alive, let alone a great actress. So the moral is, never say no to Jon Voight 🙂