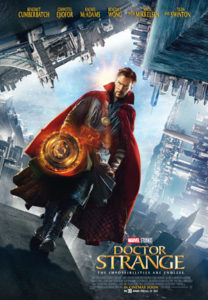 How many trick or treaters did you get that were dressed as Doctor Strange? I’m going to guess that you got none. You probably saw more kiddos dressed like Thor, Spiderman, Batman, Harley Quinn or Iron Man. Well next year you might see a few more kids wearing fake or drawn on goatees and donning red velvet colored capes.

The latest addition to the Marvel cinematic universe is the egocentric neurosurgeon, Stephen Strange. The world renowned doctor showboats while patients’ lives are on the line. He loves demonstrating his calm demeanor and unflinching hands under immense pressure during operations that require precise movements. He values his hands much like a model covets their hourglass shape. But that all goes out the window after he suffers a horrific accident (don’t text and drive), that requires pins, needles and plates to reconstruct his hands. All that’s left after multiple surgeries are trembling scarred fingers resembling flesh pudding.

Refusing to accept that he’s lost the use of his hands, Strange goes on an experimental medical journey that ends in impoverished Tibet. Whispers and rumors have led him to the mystic Ancient One (Swinton). Despite reservations about Strange’s narcissism, she takes him in. She hopes to upend his self-centered Western mind and open it to the powers of Eastern religion and ancient mysticism; all while spouting lines of dialogue reminiscent of Taoism or Gautama Buddha.

Outside of being the most mentally and spiritually stimulating entry into the Marvel movie catalog, “Doctor Strange” features a superhero that prefers brains over brawn. But when fighting is required, it’s a visually stunning treat. The visuals are a mix of “Inception,” M.C. Esher, “Avatar: the Last Airbender,” “The Matrix,” and a Pink Floyd acid trip. When the world begins to bend and fold, the grand music score, with morsels of Eastern stringed musical instruments and psychedelic synthesizers, props up the optical mind trickery.

As for the story, it lacks the right amount of emotional magic and it seems to suffer what most Marvel movies lack, an interesting and relevant villain (just sit through the credits for more proof that Marvel is out of villains). Mads Mikklesen, who’s been an iconic villain in everything from
“Casino Royale” to his eerily role as a middle-aged Hannibal Lecter in NBC’s TV show, seems wasted in this movie as Kaecillius. Kaecillius’ motivation is a blend of rebellion against the Ancient One and his immoral infatuation with immortality.

Despite my frustrations with a lack of Mikklesen, Cumberbatch and Swinton are a delight to watch with their “Karate Kid” teacher/student moments. The duo has the most to offer their characters while everyone else is left to play second fiddle to them. Rachel McAdams plays Strange’s toss-away love interest and Chiwetel Ejiofor spends most of his time standing in proximity to main characters so he can provide key plot points.

Despite some of its storytelling flaws, Doctor Strange is the most thought provoking of Marvel’s movies, while keeping intact the thing we’ve come to know and love from Marvel studios. “Doctor Strange” was definitely a risky gamble for Marvel, but it’s paid off. And not just because of Cumberbatch’s acting and a crew dedicated to dissecting and dismantling everything we thought about the world, but because it puts aside the city destruction and violence for some thoughtful superhero development.